A brief review of the District Pub in North Hollywood; but first, a little love note to a hometown girl. 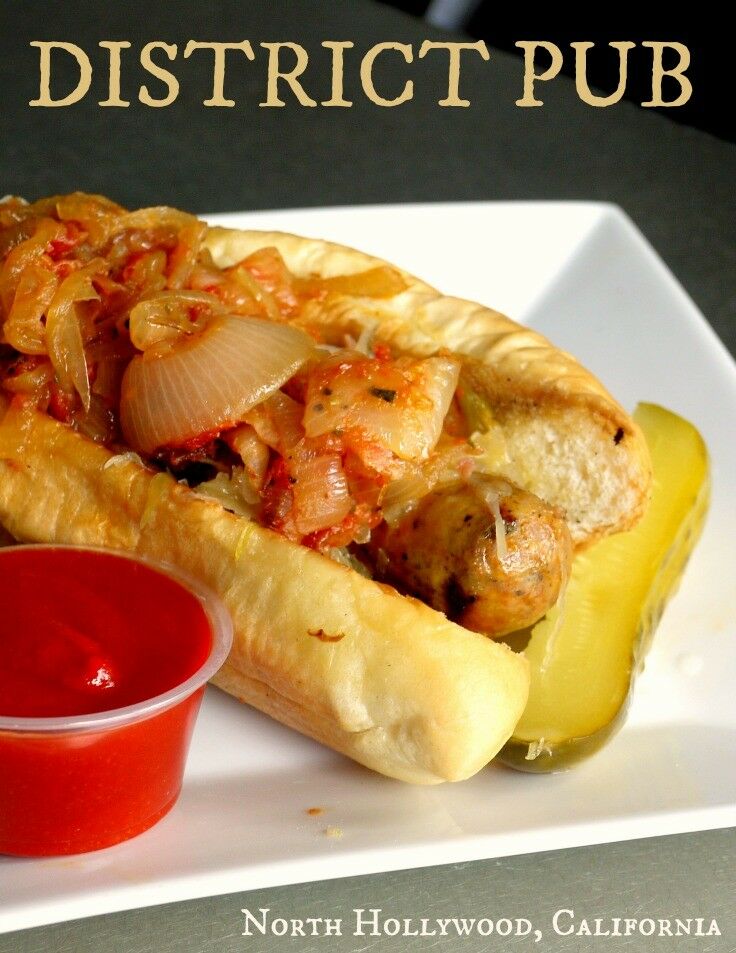 Last summer when Mr. B and I were in southern California, we scored a couple of tickets to see Portland native Sally Struthers in the stage play Always…Patsy Cline at the historic El Portal Theatre, located in the North Hollywood [NOHO] Arts District. Sally grew up on the eastside and graduated from Grant High School in 1965, and silly as it may sound, we were both kind of tickled to be seeing a hometown girl up on stage. But there’s a little more to it than that…

A little background: When we were kids, Mr. B worked as a carver at a place called the Prime Rib (now “Clyde’s Prime Rib”) in northeast Portland. He had a little rolling cart on which a whole prime rib was set, and his job was to carve your prime rib to your specifications, right at your table. Very late one night, he called my house all excited and talking a mile a minute.

At the time, Sally was fresh off her nine-year stint playing Archie Bunker’s daughter, Gloria, in the iconic 70’s TV show All in a Family, and her appearance at the Prime Rib was the biggest brush with celebrity Mr B had experienced in his brief sixteen years. He was thrilled. Ever since that night, Sally has had a special place in both our hearts, for reasons she will likely never know. 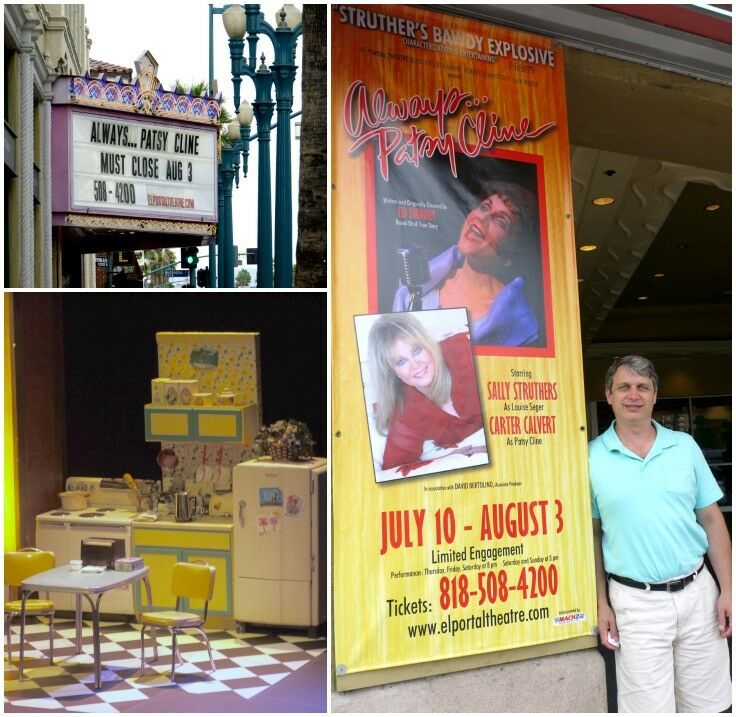 For the record, the show was fabulous – far better than either one of us anticipated. Carter Calvert, as Patsy Cline, channeled the tragic singer’s voice and patter so well that at times we forgot where we were; and Sally, playing the part of Patsy’s adoring fan-turned-friend Louise Seger, was funny, energetic, and wildly entertaining. The play weaves an amazing playlist into a two hour show, and the genuine rapport between Sally and Calvert was so engaging that everyone in the audience was pulled in with them.

♥ Sally, if you somehow find your way here to read this – you are great! You may have moved away from home years ago, but the eastside girl in you still shines through. Thank you for a lovely, memorable evening. ♥

Now, back to the District Pub. We decided to grab some dinner before the show, and the Pub was just down the block from the theater, so we decided to check it out. When Mr. B saw the Gourmet Sausage section of their menu, he was sold. 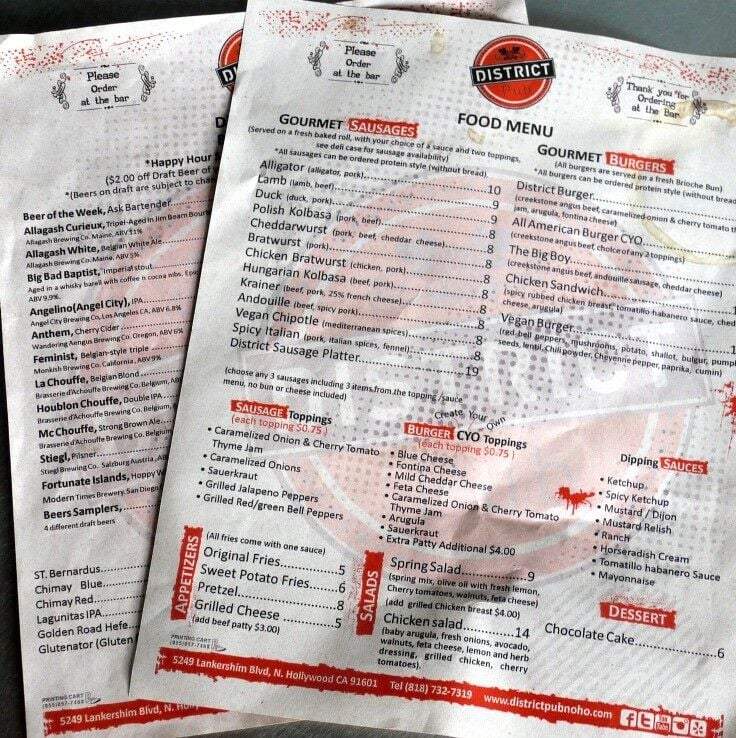 Prices have gone up again since our visit. Click the image for the current menu.

The vibe at the District Pub is relaxed and easy-going, and the staff is very friendly and helpful. There is an indoor bar and seating, but we chose instead to sit in the small patio area out front, where we could watch the street crowd make their way to theater. 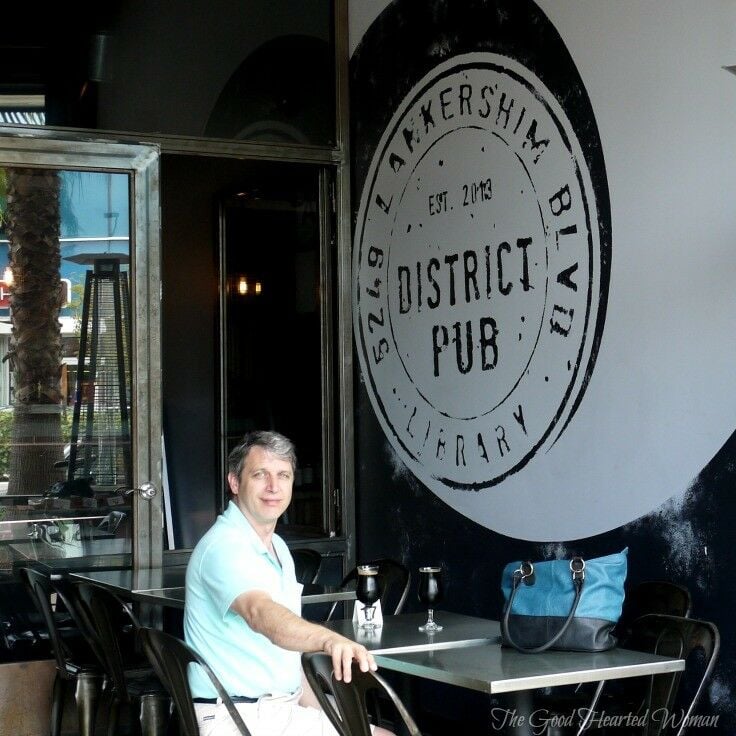 The prices on the District dogs make even inflated ballpark prices seem like a bargain, but how often do you get to sample alligator sausage? Or hand-crafted Hungarian Kolbasa?  There are a number of toppings and dipping sauce available for both sausages and burgers, some at an extra charge. They also have a better-than-decent drink menu, featuring a seasonally rotating selection of 24 craft beers on tap along with wine and specialty mix drinks. 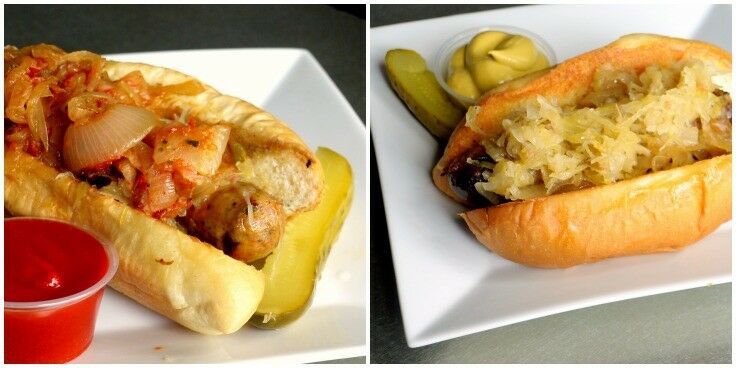 We didn’t try any of the burgers, but we saw a number of them go by and they looked juicy and delicious.

Overall, the District Pub makes a solid choice for a quick meal if you are in the neighborhood and hungry for something savory and filling with a side of sweet potato fries.