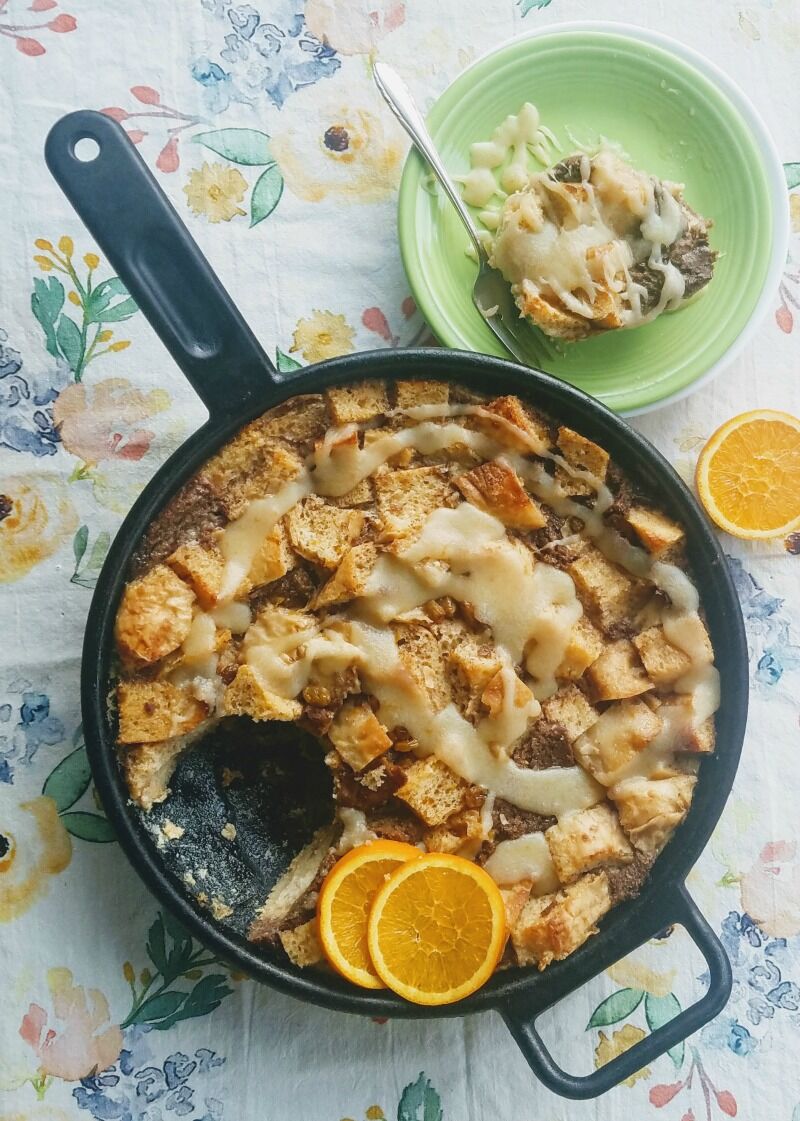 Bread pudding is a delicious way to use up old bread. Growing up, if any part of a loaf of bread went stale, my mom would never even think of throwing it out. Waste not, want not. Instead, she would make one of my all-time favorite desserts: bread pudding. 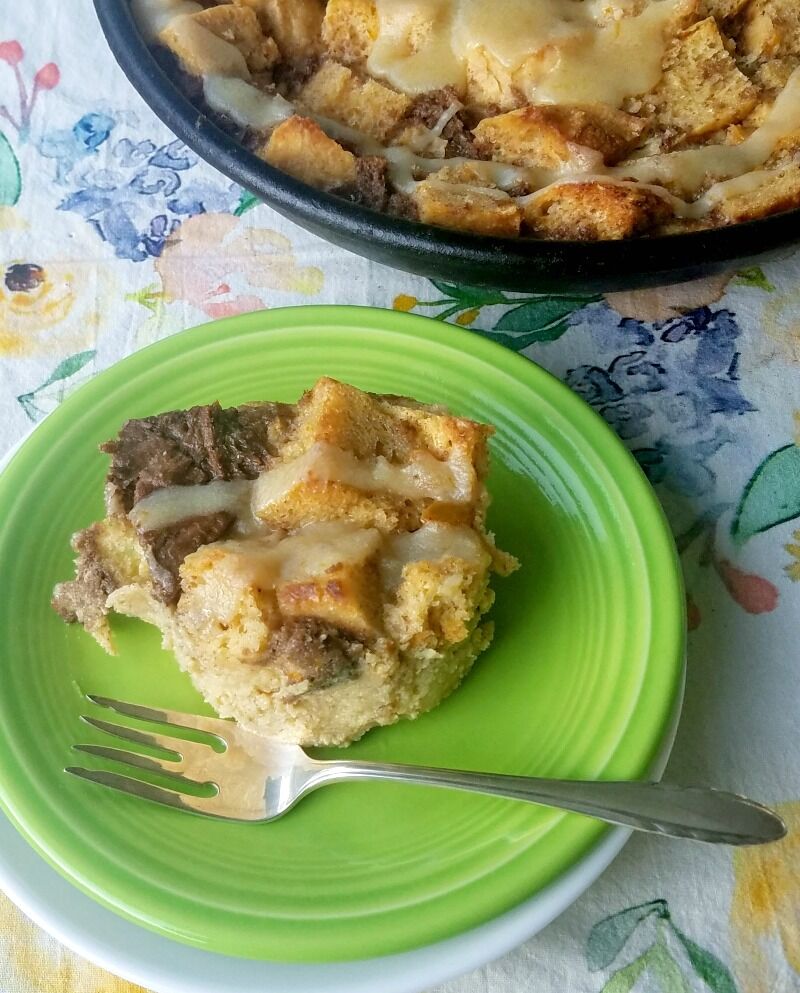 When I grew up, I adopted Mom’s thrifty practice of saving old bread. I keep a large resealable bag in the freezer, and whenever we have a lone slice of bread or a part of a loaf goes stale, I throw the extra bread in the bag. When I have enough, I make bread pudding. 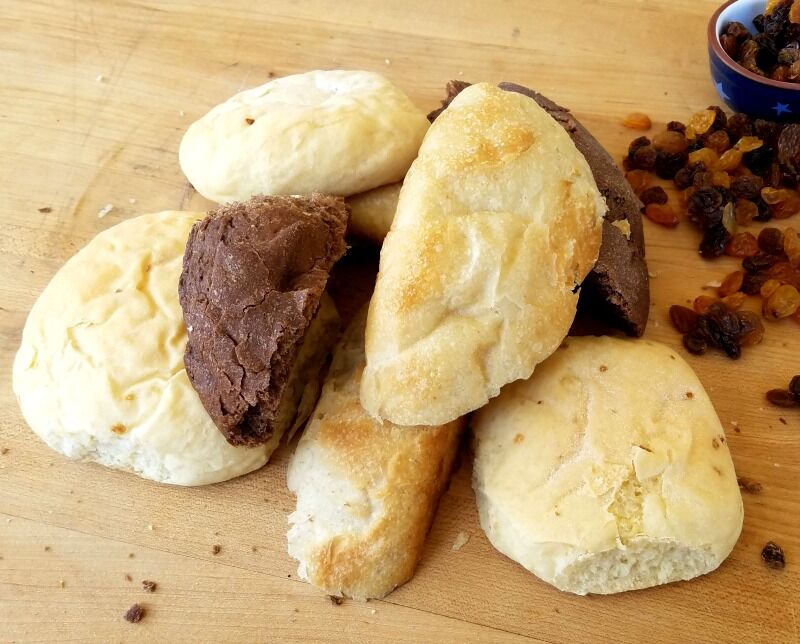 You don’t need to be picky about the kind of breads that go into your bread pudding. (I mean, that’s kind of the point, right?) I do like to use a variety if I have it, though. Don’t be afraid to use breads with unique flavors or textures, either! Rye bread is one of my favorite breads to use.

This Easy Bread Pudding is full of sugar and spice and everything nice – and the recipe almost impossible to flub. The foundation recipe below (i.e., Basic Bread Pudding), even without any additions or sauces, makes a perfectly delicious dessert just as written.

By now though, you probably know that I like Options. I need to change things up from time to time, and bread pudding is no different. I’ve included four of our favorite bread pudding variations on the recipe card below:

It all just depends upon the extras you throw in.

Once you master the basic recipe, you’ll find yourself coming up with all kinds of combinations of your own.

CINNAMON WHISKEY BUTTER SAUCE is totally optional. (However, adding it will take your bread pudding to the next level!)Nutrition information includes the "Basic Bread Pudding" recipe ingredients only. It does not take into account additional ingredients listed in the recipe options (i.e., dried fruit, baking chips, etc.) or ingredients in the Cinnamon Whiskey Butter Sauce.

My mom never made a sauce for our bread pudding when I was a kid (hers was heavenly all by itself), so I didn’t discover spirit-infused butter sauce until I was in my late twenties.

Back then, we used to stop at a sweet little diner down in Netarts (if I remember right) on the Oregon Coast, just for their bread pudding. I can still remember the first time a warm piece of bread pudding arrived at our table soaked with decadent, buttery rum sauce – Oh.My.Gosh!

Ever since, I’ve always enjoyed a spirited butter sauce with my bread pudding. (As if it isn’t already decadent enough!)

All of the alcohol cooks out of this sauce when made as directed. However, if you prefer not to use alcohol in your cooking at all: The resulting sauce will be a much milder, but still delicious.

If dessert sauces are something you crave, checkout our round-up of caramel and butterscotch recipes! (And find out what the difference between them is, too!)

Soft Baked Oatmeal Breakfast Bars are loaded with coconut, fruits, seeds, warm spices, and rolled oats, with just the right amount of sweetness. Naturally gluten-free and dairy-free, they fit right in your hand for a healthy breakfast on-the-go.

Seven minutes. When my youngest was thirteen, that’s how long it used to take her to get dressed, check her face, comb her hair, check her face again, maybe put on a little make-up, gather her school supplies (that were supposed to have been gathered the night before), grab her clarinet, hug her Mama, and run out the door…

Breakfast, if there was one, was in her hand – because if she couldn’t hold it and eat it before she got to the bus stop, it got stuffed in her backpack and forgotten. (Because, heaven forbid should anyone know that she actually eats breakfast.) (Because, “I’m not eating at the bus stop: that’s so embarrassing.”) It didn’t matter how early she awoke; breakfast was always a struggle.

If I could time it just right, I might be able to get her to take a breakfast burrito, but her most frequently chosen breakfast was a grocery store granola bar, (which are fine for snacking or grabbing a quick carb boost, but lack any substantial protein and are filled with unpronounceable ingredients).

This Baked Oatmeal Breakfast Bar recipe makes a half-sheetpan full of soft, chewy oatmeal breakfast bars. Loaded with coconut, fruits, seeds, warm spices, and rolled oats, these bars healthy protein and complex carbohydrates with just the right amount of sweetness. They are naturally gluten-free and dairy-free; plus, they fit right in your hand for a healthy breakfast on-the-go.

Wrap these breakfast bars individually (or, better yet, vacuum-seal them) and freeze them; then thaw to room temperature whenever you want one. For a warm breakfast on the go, ten seconds in the microwave makes them even better. Sealed breakfast bars will last up to four months in the freezer.

I like to wrap these individually and freeze them in gallon-sized Ziploc bags, then take out however many I need the night before. They’re great cold, but for a warm breakfast on the go, ten seconds in the microwave makes them even better.NOTE: Nutritional analysis DOES NOT INCLUDE optional add-ins.

Over the course of my life, I must have thrown a thousand bread heels away. When I was a kid, they were just so much more crust, which I was not big on at all. Then, as an adult, the heels on “store bread” always seemed to get pushed off, by both me and my kids because, let’s face it – they are usually thin and dry and not all that appealing. (Wow. Talk about your First World problems.) Sure, I’ll use them for French toast, or the last sandwich face in a pinch; nevertheless, they tend to be the last piece left and more often than not, they get tossed. I know – terrible habit, but it’s the truth.

Homemade bread heels are another story. Because, first of all, I made that bread, dang-it! With my own two hands!! Plus, everyone in the house seems to like the homemade bread heels, especially if they can snag one while the loaf is still warm. But even with that kind of demand, I usually still have a little bag full of bread heels by the end of the week – particularly when I am on a bread-making binge – and I just don’t have the heart to throw them away. Last week, I found myself with a four little heels and a couple of stray pieces of stale-ish bread – not nearly enough to make a whole pan of bread pudding, but just the right amount for making our little family Bread Pudding Muffins for breakfast. They are so easy to make, and take less than 20 minutes start to finish.

This recipe is extremely flexible – just use what you have on hand. Makes a great breakfast or after-school snack.