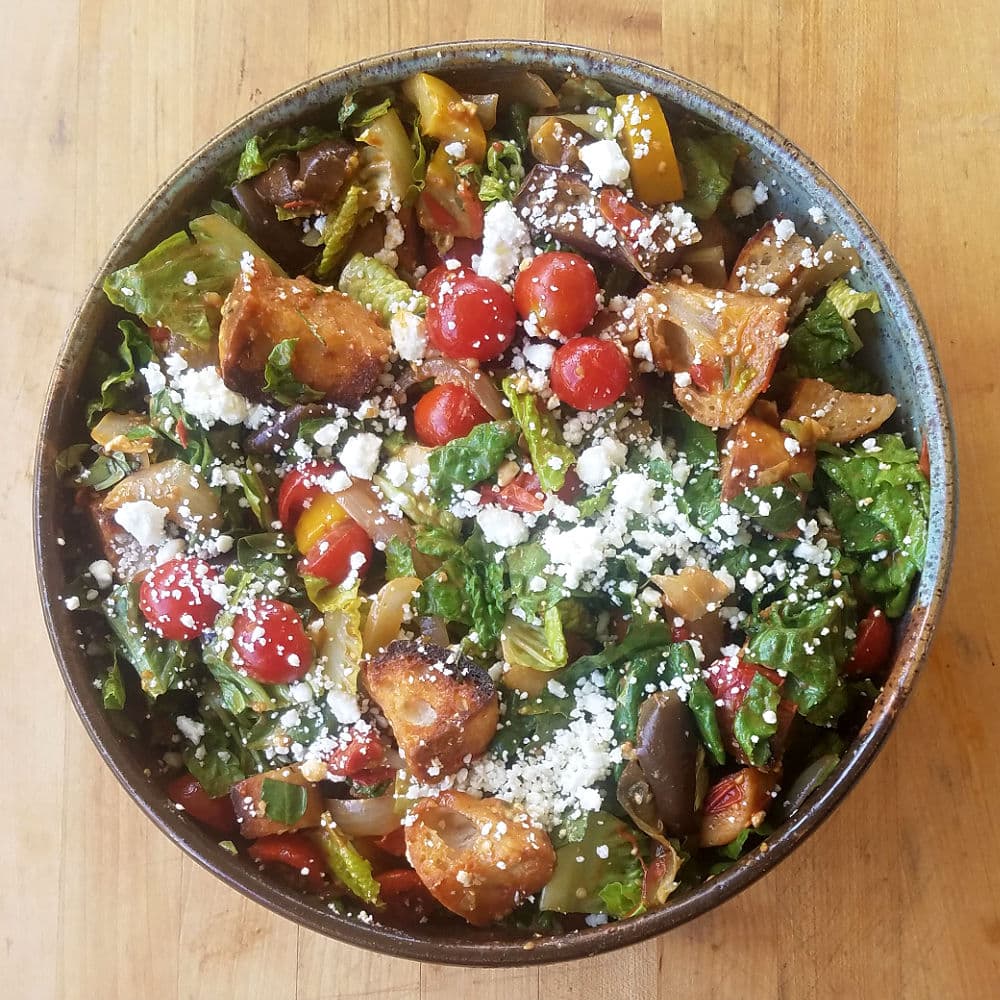 Panzanella (or panmolle) is a Tuscan chopped salad made primarily of stale bread, onions, and tomatoes, most often dressed with oil & vinegar. It dates back to the peasant habit of soaking Tuscan stale bread and mixing it with garden vegetables. The name “panzanella” appears to be derived from the combination of pane (bread) and zanella (soup bowl).

Two of my favorite things – bread and fresh  veggies – right there in one fast, easy to fix meal! I’m totally in! 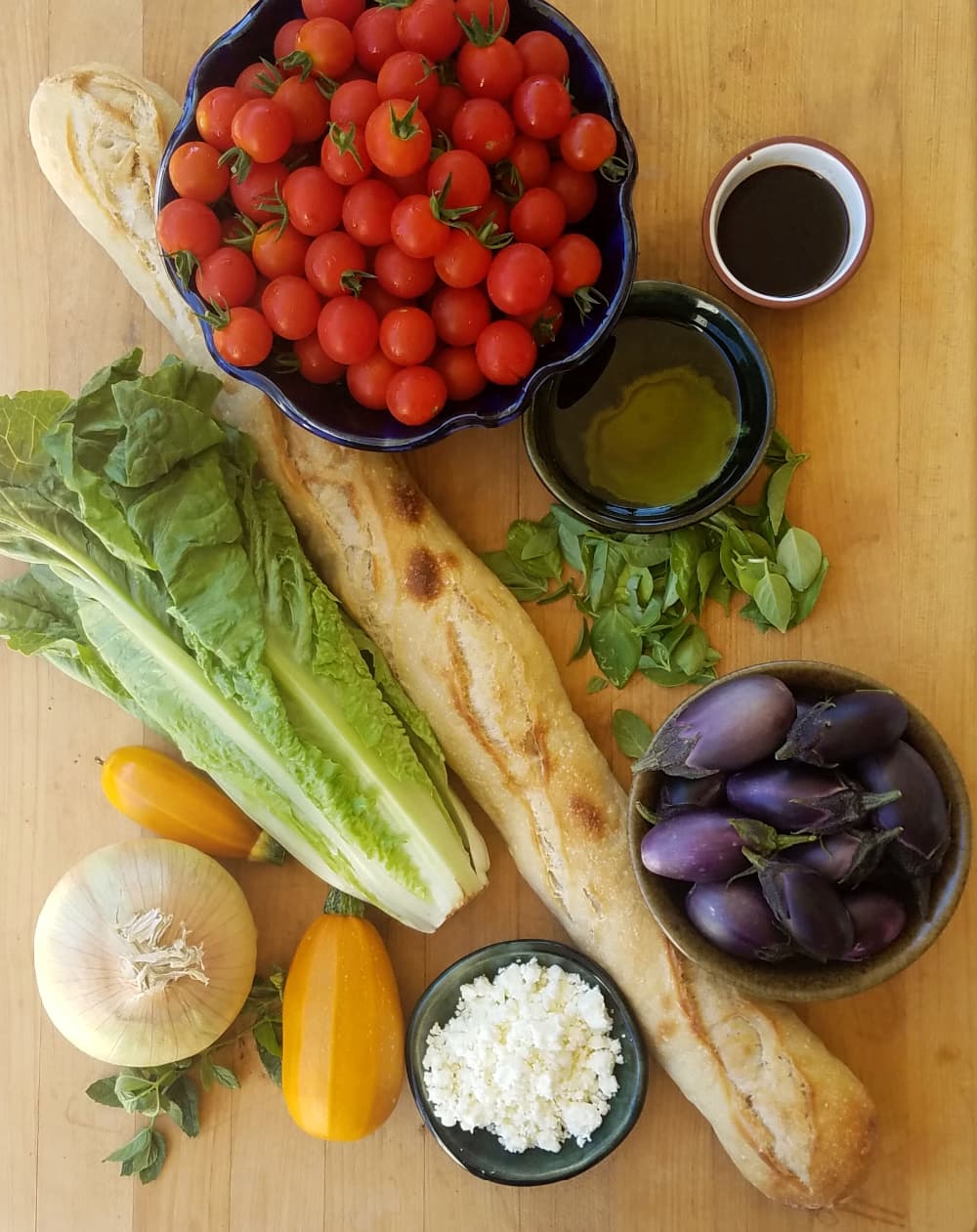 You can use any hearty, substantial bread for this recipe; however, it is traditionally made with Tuscan bread. (I usually use a good sourdough baguette.)

Did you know that real Tuscan Bread is saltless? Tuscan bread is a staple in Tuscan cuisine, traditionally employed in such dishes as ribollita, pappa al pomodoro, and of course, panzanella. 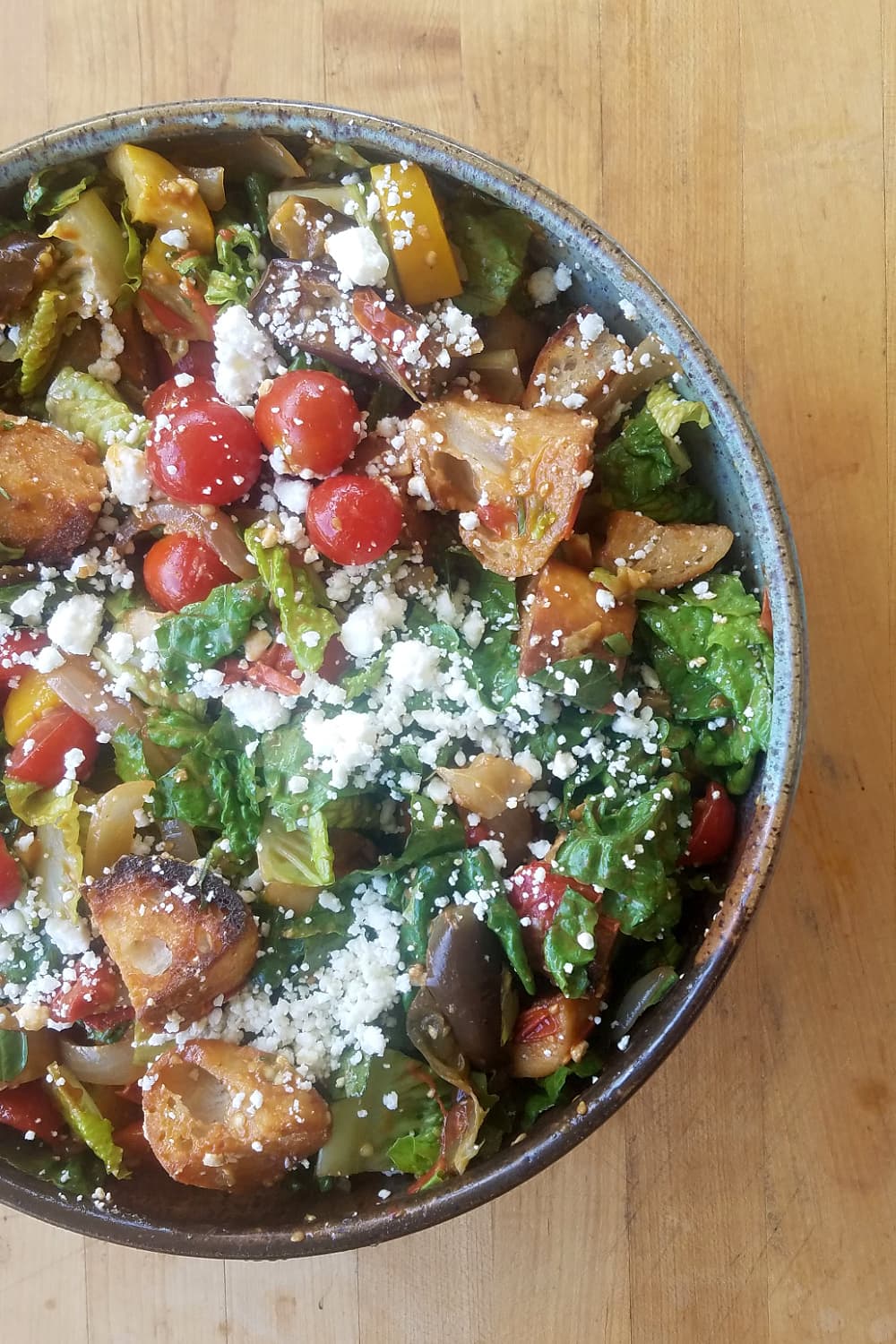 This Mediterranean Panzanella salad is perfect for late summer when gardens are bursting. The recipe itself is quite flexible: you can vary the veggies to suit your tastes or your garden’s bounty. For the salad pictured here, I used squash, eggplants, tomatoes, and herbs fresh from our (tiny backyard) garden!

This recipe was created for maximum flexibility: I don’t think I’ve ever made it exactly the same twice. Feel free to any fresh garden vegetable that you like.

Be sure to check out these other delicious meal-size salads; including our Potluck-worthy Cuban Salad, Spicy Thai Shrimp Salad (an Applebee’s Copycat), and Vintage Layered Taco Salad.

THANK YOU for being a faithful reader and supporter
of The Good Hearted Woman. • Be sure to PIN this post!

Muhammara – Roasted Red Pepper & Walnut Dip – is a versatile, savory-sweet Middle Eastern dip. Delicious spread on pita or veggies, or as sauce for kabobs, this gluten-free, vegan version is amazing!

Muhammara, or Roasted Red Pepper & Walnut Dip, originated in Aleppo, Syria, and its principal ingredients traditionally include red peppers, ground walnuts, breadcrumbs, spices, olive oil, and a . However, this recipe – inspired by popular local pub fare – omits the bread crumbs, and instead uses roasted carrots to thicken and extend the dip. Not only do the carrots keep this delicious savory-sweet dip gluten-free, but they give it a wonderful creaminess and infuse an earthy sweetness as well.

Dottie and I ordered something called “Three Faces of Eve,” [super-fancy hummus plate] and sat down to rehash the evening, poet by poet.

Forty-five minutes later, still no hummus plate. When we finally got our waitress’s attention and she (let’s call her Alice) went to check on our order, only to return frantic and apologizing all over the place. Alice said she had no idea what happened but the kitchen never got our order.

“Is there anything I can do to make it up to you?” she asked us – at least seven times. In between apologizing, she kept up a steady train of chatter, trying so hard to be accommodating that it was driving us nuts. All either Dottie or I could think was, “It’s OK, we understand. Really. Just please stop talking.”

I almost got misty. This recipe had been on my wish list for years! I scanned the handwritten recipe briefly and then tucked it away, already calculating the Alice’s generous tip. It’s a good thing my scanning skills are pretty tight, too; because somewhere between that Bagdad booth and my front door, Alice’s little slip of paper completely disappeared.

Surprisingly, I took recipe loss in stride. In my quick perusal, I’d memorized the ingredient, along with a general idea of the basic ratios.

In the long run, losing it wasn’t entirely a bad thing. It forced me to really work each this recipe out for myself, and even take some pride in the result! I hope you enjoy our version of Muhammara as much as we do!

Pomegranate Molasses is the Secret Ingredient

Pomegranate molasses is the one distinct, “secret” ingredient in this recipe, and what lends to its unique, savory-sweet flavor.

Called molasses not for its origins, but for its dark, syrupy consistency, pomegranate molasses is, in fact, a thick fruit syrup made from pomegranate juice.

Pomegranate molasses is a bit like a less sweet, less tangy balsamic reduction, and I find that I can use it anywhere I would use a good balsamic glaze.  (I’ll be honest: until I started making muhammara at home, I’d never even heard of pomegranate molasses. I’ve since found a number of delicious uses for it.)

Put it all together!

As with many things, the flavors in this dip benefit greatly by having a little time to blend. It can definitely be eaten immediately after making it, but If you are making this for a party, I strongly suggest doing so a day ahead of time to allow the flavors to mingle and come together. Serve cold or at room temperature. If you prefer your dips a little chunkier, reserve one carrot and a handful of walnuts until after you have mostly pureed the mixture, then throw the reserve nuts and carrot in and pulse for a few times to combine.

If this Muhammara sounds tasty to you, be sure to check out our Armenian-style Eggplant & Carrot Salad and Moroccan Carrot Salad with Harissa, Feta & Fresh Herbs recipes!

Inspired by the cuisine of Armenia, this Eggplant & Carrot Salad combines simple ingredients to create a supremely satisfying salad. Perfect for everything from a light spring lunch to an autumn potluck.

Some years ago, my daughter married a charming Armenian who can cook like there is no tomorrow. Over the years since he joined our family, Vahe has introduced me to the foods and culinary traditions of his native country, and one of my favorites is a little rolled vegetable preparation called Armenian Eggplant Rolls. Wrapped in long strips of garlic-infused fried eggplant, these are delicious little carrot-stuffed beauties hit all the best savory buttons, with just the right amount of sweet undertones.

As much as I love Eggplant Rolls though, I’m not a fan of making them. The original recipe is heavy on oil (eggplants are real sponges when you fry them!), and somewhat labor intensive.

Instead, I created this Eggplant & Carrot Salad – a simple alternative that tastes great, cuts the fat to almost nothing, and is very easy to make.

While the end result isn’t quite as pretty as the little beauties my daughter makes, Eggplant & Carrot Salad does make a good presentation – vibrant, colorful and delicious, and perfect for everything from a light spring lunch to an autumn potluck.

Be sure to try our Carrot Ginger Salad Dressing recipe, too!