You can’t buy the legendary Original Taco House Fiesta Dressing at the restaurant or in the store anymore, but now you can make it at home!  Perfect sweet heat for tacos, salads, sizzling meats, party dips – and much, much more! 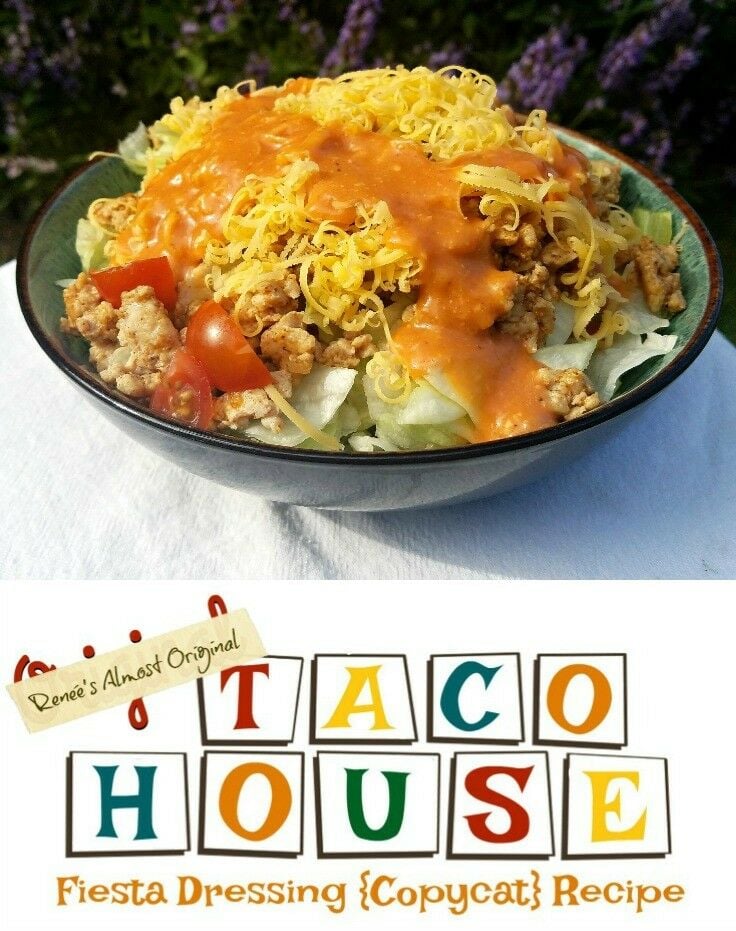 On December 31, 2017, the Original Taco House, Portland’s first “Mexican” restaurant and a fixture on the Eastside for more than fifty years, abruptly closed its doors forever – yet another old-school Portland restaurant lost to the mists of time.

The Original Taco House was one of those places that brought families together. The food was dependably good and priced to sell in our working-class neighborhood, and when I was little, it was one of my family’s go-to spots for a night out. My Dad was a middle school teacher, and he often had former students who waited tables there, so there was always a smiling face to greet us. They treated Dad like a celebrity, and we always got great service.

The Original Taco House on Powell was the second OTH to open. [Image by Victor von Salza, used with permission]

When I got older and started dating Mr B, we made some fond memories of our own at The Original Taco House. The original location on 82nd Avenue was just a short walk from our high school, and in 1980-something you could get a beef “El Picador” (what they called nachos before we called them nachos) or a large “meat & cheese salad” – both smothered with that amazing Original Taco House Fiesta Dressing and big enough for two – for four or five bucks. Needless to say, Mr B and I spent many (extended) lunch hours there sharing a meal and gazing adoringly into each others’ eyes.


Later, when I went on to have my own family, we often found ourselves eating at the Original Taco House when we visited my parents, to the point where it became one of my kids’ favorite eating spots. And the last time we ate there as a family, my grandchildren were sitting around the table with us. After three generations, dinner at the Original Taco House had become a solid family tradition.

After all that history, it probably goes without saying Mr B and I were pretty broken up about the Original Taco House’s sudden closing. Sure, the decor was dated and the menu anything but authentically Mexican, but we loved it because of those things, not in spite of them.

Now there will be no more pictures of adorable black-eyed babies in sombreros hanging on the wall watching you eat. No more burros with brightly colored saddle packs. No more (amazing!) corn-flake crusted deep-fried ice cream balls. No more sizzling “El Picadors” heaped with melting cheese and olives and peppers. No more amazing house-made Fiesta Dressing.

When I figured out that our favorite salad dressing would no longer be available, I started to worry. I checked our bottle in the fridge: only about two or three ounces left. I checked local stores: discontinued, and limited to stock on hand. Amazon: same. I sprung into action:

Me: “OK, no one touch the taco salad dressing!”
Them: “Why?” (Until that moment, no one was even thinking of it.)
Me: “I have to figure out the recipe before it’s all gone. I need it for taste comparison.”
Them [reaching into the fridge door for the bottle]: “What if we just use a little?” (Once again, no one had even considered using it that day until I mentioned it.)
Me: “Not. One. Drop.” (Translation: Just put the bottle down and walk away slowly, and no one will get hurt.)

Good thing they know when I mean business.

To recreate the recipe, the first thing I did was consult the ingredient label on our treasured “last bottle.”

Conveniently, ingredients on product labels are listed in order of predominance, with the ingredients used in the greatest amount first, followed in descending order by those in smaller amounts. This gave me a good road map for figuring out the recipe.

I chose the brands of necessary premade products (i.e., El Pato Tomato Sauce, Chalula hot sauce) based on the ingredients listed parenthetically on the label list (i.e., the list of collective ingredients in the hot chili sauce, Worcestershire sauce, etc. as listed on the label) in an effort to keep them as close to the original ingredients used as possible.

In the end, I think we hit it pretty darn close. (We even nailed the exact calorie count of the original!) The mixture I created is somewhat creamier in appearance than the original Original Taco House Fiesta Dressing, but the flavor is spot-on and it has the familiar slightly sweet kick and peppery tang that we crave so much.

Fiesta Dressing is essentially a Tex-mex spin on Catalina: a sweet, spicy, and tangy, with just a hint of Romano.

This dressing is ready to use immediately, but a day in the fridge will help the flavors really come together.
1 serving = 2 tablespoons = 60 calories = 2 Weight Watchers SmartPoints [2018]
Tried this recipe?Mention @TheGoodHeartedWoman or tag #thegoodheartedwoman!

The entire recipe for The Original Taco House “Meat & Cheese Salad” is contained in its name: Meat+Cheese+Salad (i.e., lettuce, tomatoes, dressing). So simple, and yet so good. (I make ours with seasoned ground chicken.)

Fiesta Dressing adds a sweet little kick to tacos, salads, and nachos, of course, but I’ve also used it in everything from eggs to soups to casseroles, and as a marinade for grilling, all with amazing results.

THANK YOU so much for being a faithful reader and supporter of The Good Hearted Woman. ❤ Be sure to PIN and Print this recipe!

ATTENTION: Following the overwhelming success of this dressing recipe, I’ve received many requests for other recipes from OTH, including the enchilada sauce and mild salsa recipes. Unfortunately, while I’d love to work out and share those recipes too, I lack the ingredient lists and samples to do it properly.

To this end, I’ve made multiple attempts to contact Jeff Waddle, the last OTH owner, but have gotten no response. If anyone reading this has any solid contact info for Jeff that you’d be willing to share, please contact me asap and I will get right on it. ? ? ? Thank you

Once upon a time, I had visions of hiking through the hills and valleys of the Pacific Northwest with my happy little train of children, traipsing along whilst singing our hearts out all Von Trappified and such.  (In my perfect world, it would be totally acceptable to break out into song at any given moment.)

But then… Tweens.  Then Teens. Do you know how hard it is to entice the average teenage girl to go on a Hike with her Family?  Here’s what worked for us most recently:

“Hey, do you want to go an a super-easy hike to a mysterious, probably haunted, definitely creepy stone Witch’s House hidden in the forest?”

Before I detail the hike directions, a little history lesson is in order.

Forest Park has always been a hotbed of strange happenings in the Portland area, and Witch’s Castle is at the epicenter of one particularly haunting tale.

It seems that back in 1850, one Danford Balch filed a claim on a parcel of land near the newly settled town of Portland. Danford needed some help clearing the land, so he hired a transient worker named Mortimer Stump. Balch invited Stump to stay with his family, which included his wife Mary Jane and their nine children, while the work was being done.

Unfortunately, Stump ended up staying on a lot longer than was healthy for anyone.

It seems that Stump eventually fell in love with 15-year old Anna Balch and asked for her hand in marriage. When Danford and Mary Jane refused, the couple threatened to elope, and Father Balch retorted that if they did, he would kill Mortimer Stump. Young love being what it is, Mortimer and Anna ran off to Vancouver and were married in the fall of 1858.

Danford Balch would later claim that what happened next was the result of his wife “bewitching” him. The next time he encountered the couple, in Portland with other members of Stump’s family, a drunken Balch shot Mortimer Stump in the head. Balch was arrested, but escaped while awaiting trial.

Finally arrested again six months later on his own property, he was tried, found guilty, and subsequently hanged in October of 1859, making Danford Balch the first (legal) hanging in the Oregon Territory.

Mary Jane Balch, the “Witch” in our story, continued to live on the property. To this day, some attribute the strange occurrences at the Witch’s House to the ghosts of Danford, Mortimer, Anna, and Mary Jane.

If that isn’t enough to intrigue your teen off the couch, I don’t know what is.

Lamentably, the Witch’s House is not the actual Balch home. Over time, the Balch land was passed to various owners, and was eventually given to the City of Portland by Donald Macleay in 1897 to be used as a park.

In the 1950’s, a stone ranger station and restroom was constructed near the old Balch place, but was soon abandoned and quickly deteriorated. It is that stone structure that stands today as the Witch’s House.

If you want to visit the Audubon Society first, as we did, you can pick up the trail just to the right of the Wildlife Care Center, and then the only turn you’ll make is a quick left onto the main trail.

It’s an easy twenty or so minutes walk the hike in from Upper MacLeay, following Balch Creek on the Wildwood Trail.

Strange things are afoot at the Witch’s Castle… (If someone knows how I did this, please tell me – I may want to create the effect again someday! And no, I did not drop the camera.)

Speaking of Strange Things, Mr. B and I pose in front of a seemingly innocent doorway. And yet…

… the doorway above leads to this not so innocent little room/cave under Witches Castle. > >Shivers< <

At the end of the day, we all had a great time together, and got to explore a pretty cool little corner of our world. And for the record, I did sing on the trail on the way back – accompanied by the lilting tones of, “Oh my gosh, Mom! You are so weird!”

As a Portland native, I take that as a real compliment.

P.S. About the picture above: I’m pretty sure I’m not really that short. I’m almost positive I was standing in a hole. Or something.

THANK YOU so much for being a faithful reader and supporter of The Good Hearted Woman. ❤ Be sure to PIN this post!