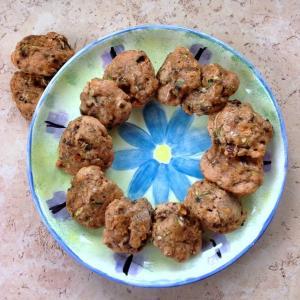 If you take the time to check out what I sent Stephanie (Coconut Date Cake-Bars) you may note that "Bakin' Friends" does not necessarily equate to "Postal Delivery Friends," in that the postal system is not always too kind to baked goods. Stephanie sent me cookies - Delicious VEGAN Apple Cookies to be exact - and the mail was no kinder to her shipment than it was to mine. I chose to forgo taking a picture of the wrapping altogether, and opted to show you the star of this show - her cookies. Did I mention that they were (in deference to the last day of VEGAN MOFO) Vegan cookies?!? That's right - Vegan Zucchini Apple Cookies to be exact!  I thought that was so great of Stephanie to take on the a challenge when I mentioned to her that I was participating in Vegan MoFo. And Boy-o-boy, can tell you??! These cookies are Moist. M-O-I-S-T. (I know, some of you just squirmed when you read that word, but I had to use it.) They were so moist that the box they arrived in had a little moist halo all around inside it, and with the heat we had a few weeks ago, I'm glad they arrived fast - they would not have survived another day! They sure were delicious though!!

Here's the recipe she sent with them: 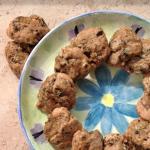