Caramel sauce (and its first cousin Butterscotch) can take a simple scoop of ice cream or a slice of pie to a whole new level of awesome. 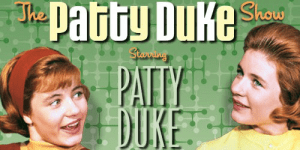 Butterscotch and caramel remind me a little of Patty and Cathy Lane. (Showing my age again. Oh well.) Patty and Cathy were identical first cousins, both played by Patty Duke in The Patty Duke Show, which aired on television back in the early 60’s. (I only remember seeing it in reruns, if that makes you feel any better.)  While both girls were identical in physical appearance, their style, tastes, and attitudes were very different, as the show’s theme song illustrates: “…where Cathy adores the minuet, the Ballet Russe and crêpes Suzette, our Patty loves to rock ‘n’ roll, a hot dog makes her lose control...”

What’s the difference between butterscotch and caramel?

The primary flavors of caramel are the sugar and cream (or milk), and ingredients usually include granulated [white] sugar, milk and/or cream, butter, and vanilla.

The dominant flavors in traditional butterscotch, on the other hand, are brown sugar and butter, and it does not contain dairy except for that in the butter. Historically, butterscotch was made with treacle (a by-product of sugar refining) or molasses, but today it is generally made from brown sugar. 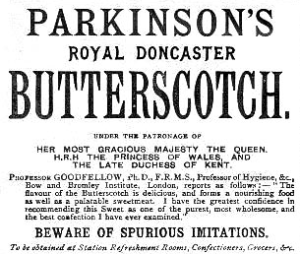 Butterscotch has an interesting history. While there are many theories about its origins, food historians (yes, that’s a thing!) agree that the first record of the word “butterscotch” appeared in 1817, when Samuel Parkinson began making the candy in Doncaster, Yorkshire, England.  The candy soon won royal approval, and became an attraction in Doncaster until production was ceased in 1977.  Then in 2003, a Doncaster couple discovered the recipe inside an old Parkinson’s St Leger tin found in their cellar. They went on to form Parkinson’s Doncaster Butterscotch Ltd, and now produce butterscotch made from the original recipe for sale all over the world.

While making either one in candy form can be tricky (or at least require a candy thermometer), both caramel and butterscotch sauces are very easy to make, and store well for weeks.  Mr. B and I keep some in our fridge at all times, for pouring over ice cream, drizzling on desserts, and mixing in coffee and other delicious beverages. Here are a few of my favorite recipes from around the web:

Note: You may notice that there are no recipes on this list for “salted” anything. I don’t have anything against salted caramel per say, and even enjoy it on occasion, but I find that lately you can’t even throw of glance around the room without hitting a “salted caramel” something, and I’m tired of it. This is my soapbox and I’m standing on it – with my spoon in a bowl of ice cream and unsalted butterscotch sauce.

For an easy, impressive dessert presentation, serve vanilla ice cream and a sidecar of banana lumpia.