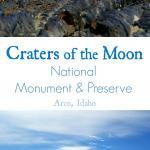 Idaho has lava fields‽ Find them at Craters of the Moon National Monument and Preserve, a collection of more that 60 lava flows that combine to cover 620 square miles of the Snake River Plain in eastern Idaho.

On a recent trip to eastern Idaho, we decided to get away from the freeway and take the "scenic route." One of our primary objectives in doing this was to visit the Craters of the Moon National Monument and Preserve, a collection of more that 60 lava flows that combine to cover 620 square miles of the Snake River Plain. 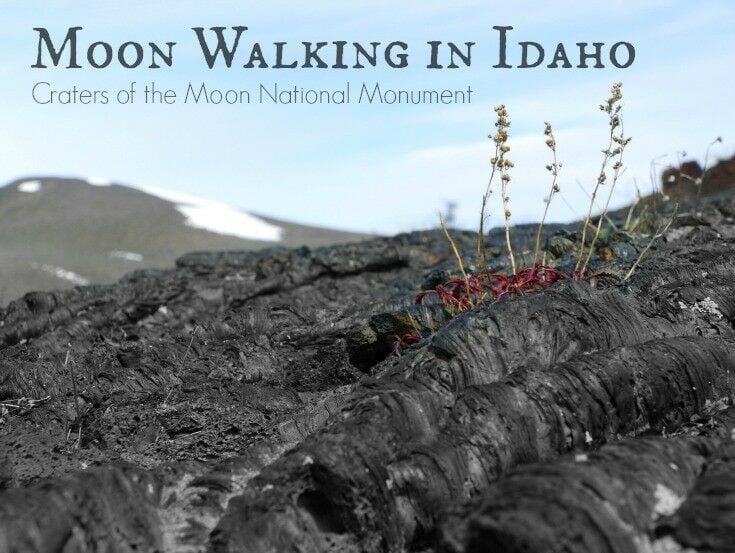 Formed during eight major eruptive periods between 15,000 and 2000 years ago, Craters of the Moon is a "vast ocean of lava flows with scattered islands of cinder cones and sagebrush." However, to simply say that Craters of the Moon is an interesting and massive geologic anomaly is to severely diminish both the vastness and the profound other-worldliness of its stark and eerie landscape. 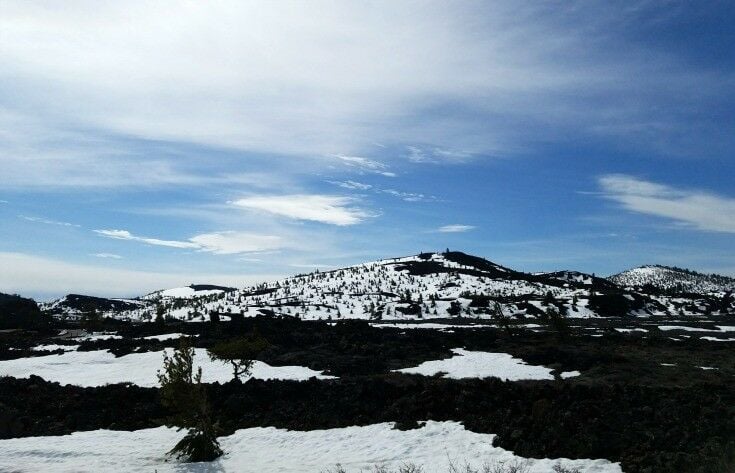 We started at the Craters of the Moon Visitors Center, where we learned about the local geology, flora, and fauna of the region. 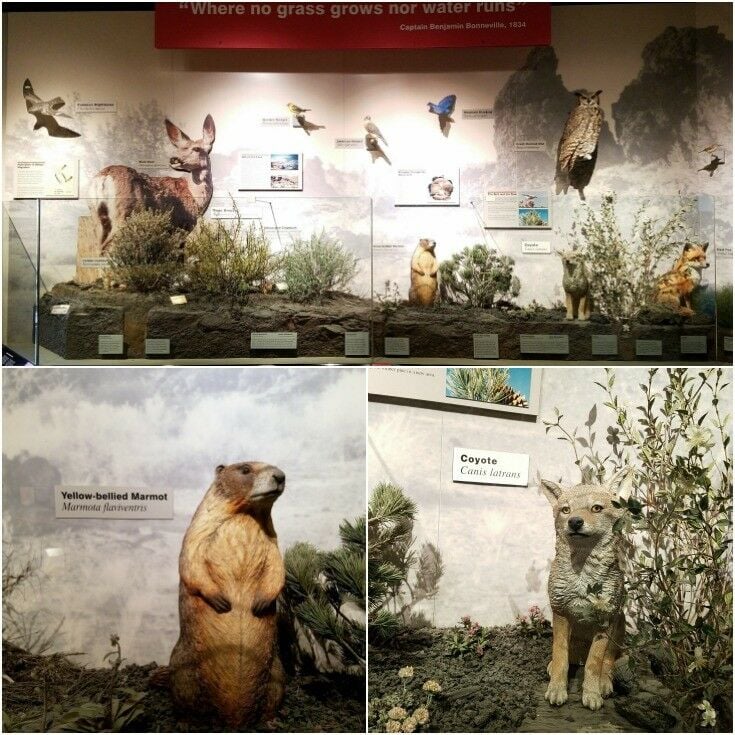 The 'Valley of the Moon' lies in a region literally combed with underground caves and passages, bewildering in their immensity, mystifying in their variety of strange formations, where there are natural bridges as yet unknown to geographers, where bear tracks hundreds of years old may be traced for miles across cinder flats. Here are craters of dormant volcanoes half a mile wide and seemingly bottomless, huge cups in which the five-story Owyhee hotel might be placed to resemble a lone sugar loaf in a huge bowl. Here are strange ice caves with stalactites and ice-encrusted walls, caves that contain as much ice in the middle of August as they do in the winter. 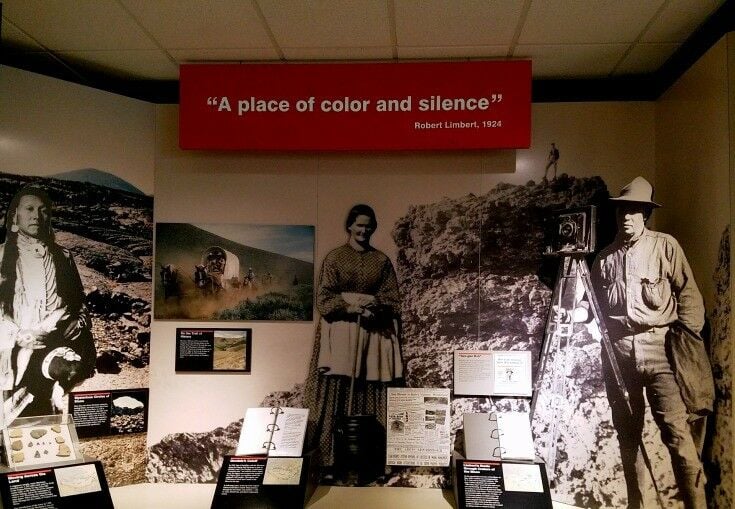 The Visitors Center also gave us a glimpse into the human history of the area.

The first archaeological record of humans inhabiting the Snake River Basin date back to the end of the last Ice Age, some 12,000- 14,000 years ago. Archaeological records indicate early members of the Shoshone and Bannock tribes and their ancestors spent considerable time at Craters of the Moon; the park museum collection holds over 5,000 worked stone artifacts from this era, including bifaces, projectile points, manos and metates, and 85 potsherds.

Between 1840 and 1870, tens of thousands of emigrants passed through southern Idaho on their way to greener pastures in the fertile west. They endured great hardships in their trek, and some never made it.

The Oregon Trail followed the course of the Snake River, about 100 miles south of what is now the Craters of the Moon Monument. In 1862, an emigrant party asked guide Tim Goodale to lead them west from Fort Hall on a cutoff pioneered by ferryman John Jeffrey in 1852. Goodale succeeded in leading the group of 1,095 people, 338 wagons, and 2,900 head of stock safely from Fort Hall to Boise.

By 1863 and for nearly five decades following, until the railroad and automobiles led to the demise of the wagon route, seven out of every ten wagons en route from Fort Hall to Boise took Goodale's Cutoff instead of the main Oregon Trail.

Visit the Craters of the Moon Visitor’s Center to learn more about the geological and anthropological history of the area. 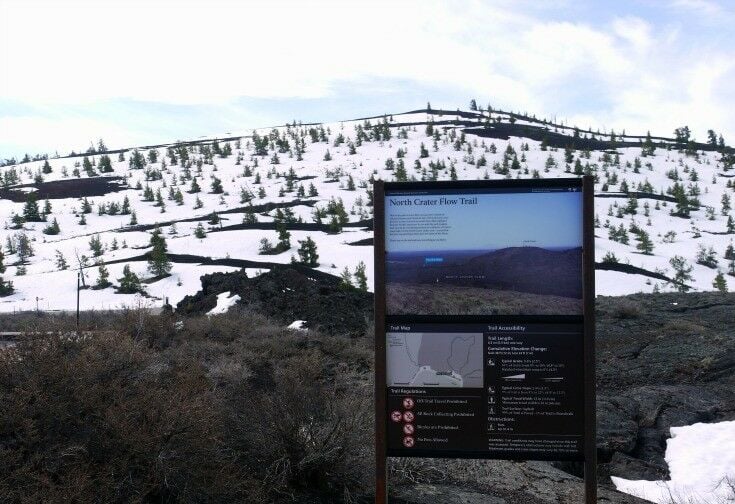 Tips for Hiking at Craters of the Moon

Although many of the Craters of the Moon trails were still snowed under at the time of our visit in early April, we did get to take two short hikes.

A short, easy third-mile introduction to the Craters of the Moon

As we walked the trail, we became more and more amazed at the vastness of the lava fields. 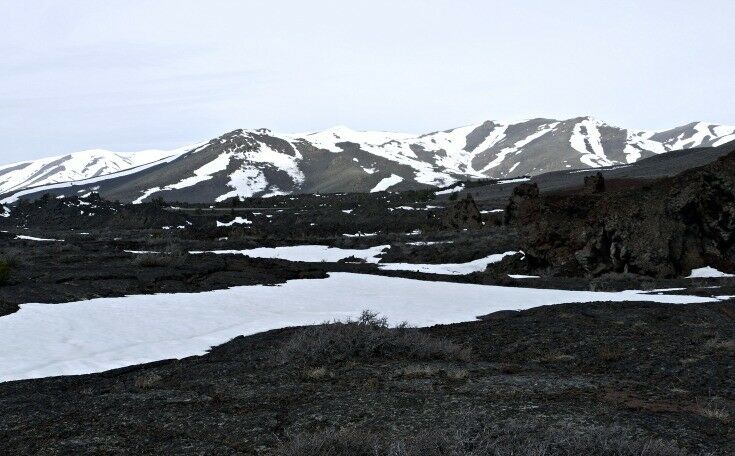 I was fascinated with these rippling "Pahoehoe" lava flows. (Pahoehoe means "ropy" in Hawaiian.) Pahoehoe is the most common type of lava flow found at Craters of the Moon. 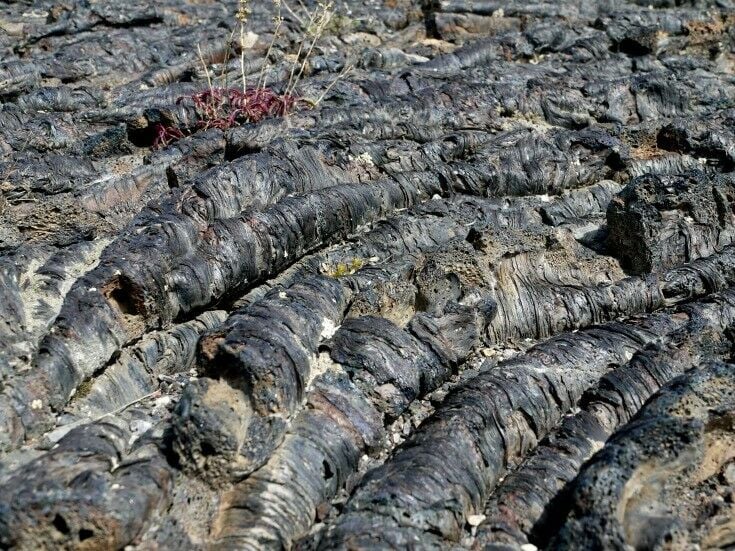 The Triple Twisted Tree, pictured here, is one of the iconic symbols of the Craters of the Moon. A core sample showed it to be at least 1,350 years old. In grand scheme of history, that means that is was a seedling about the time that the Great Pyramid of Cheops at Giza was being built. 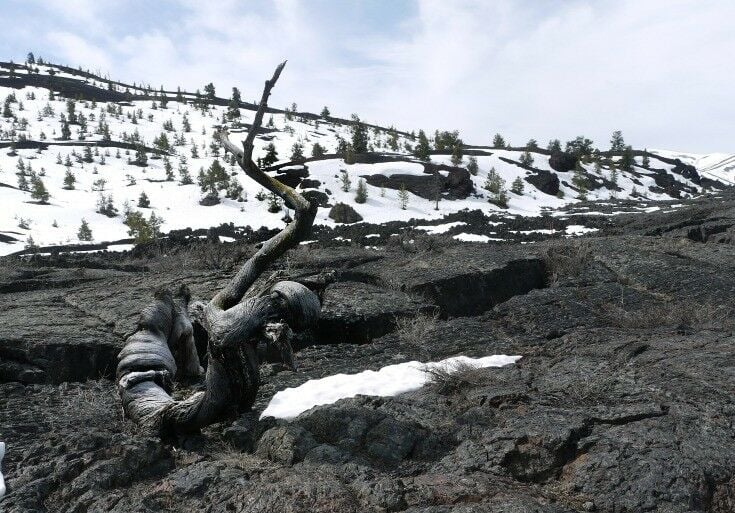 The North Crater Flow Trail is a very easy walk, and there are benches along the way for resting, taking in the scenery, or  hugging your mother. 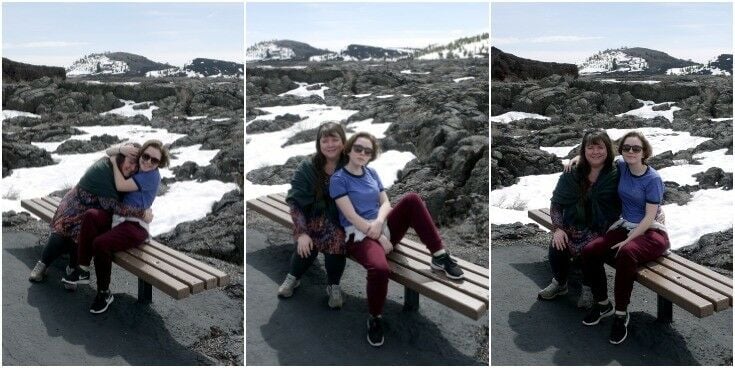 It is amazing that life can persist in such a desolate world, but it does. 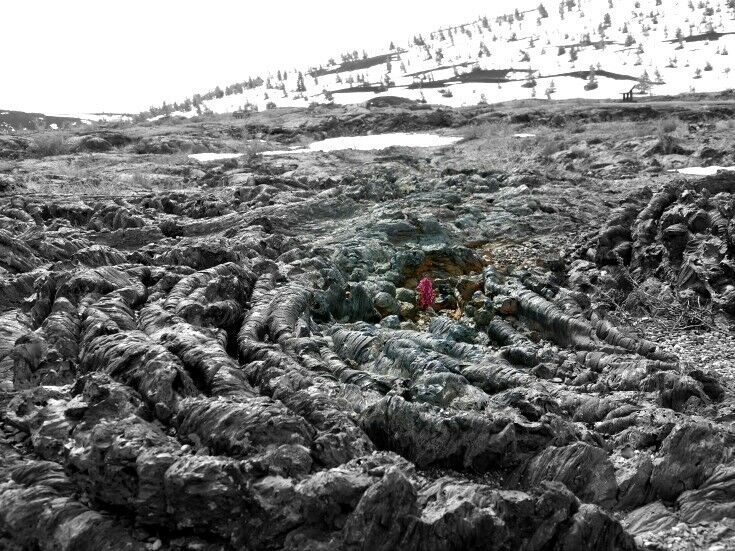 This fully-paved trail snakes through an area of cinder beds scattered with pieces of the North Crater wall. Exhibits along the trail describe the challenges the National Park Service faces in trying to protect this fragile volcanic environment.

This area of the preserve was so named when, a hundred years ago, a visiting minister declared "this jumble of rocks, shrubs, and trees to be a garden fit for the devil himself." 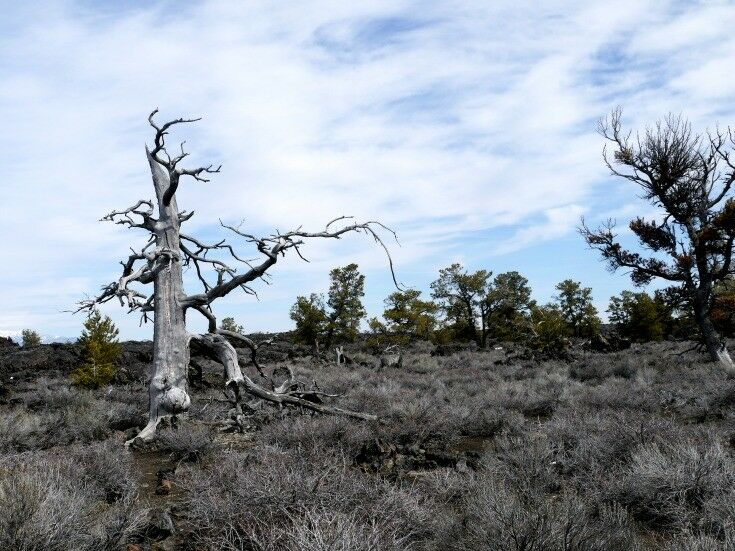 And yet sometimes, even in the middle of the Devil's Orchard, if you look hard enough, you just might find a fleeting ray of sunshine and a few signs of life. (←That's a metaphor.) (←That's a baseball bat.) 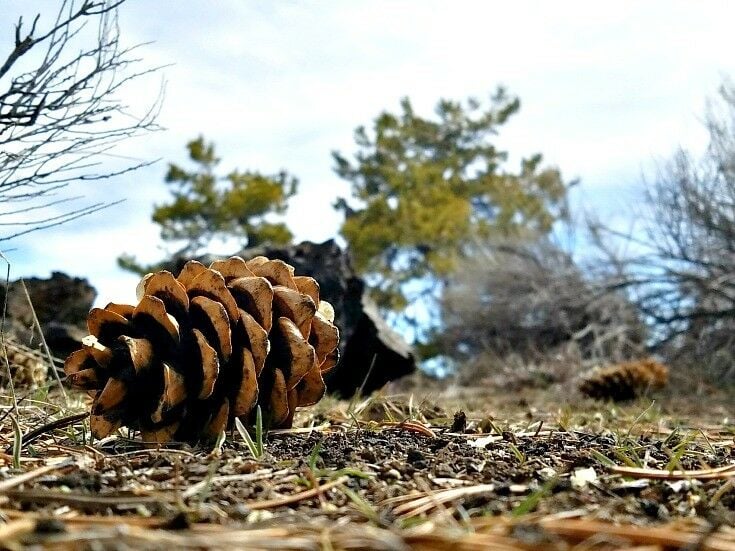 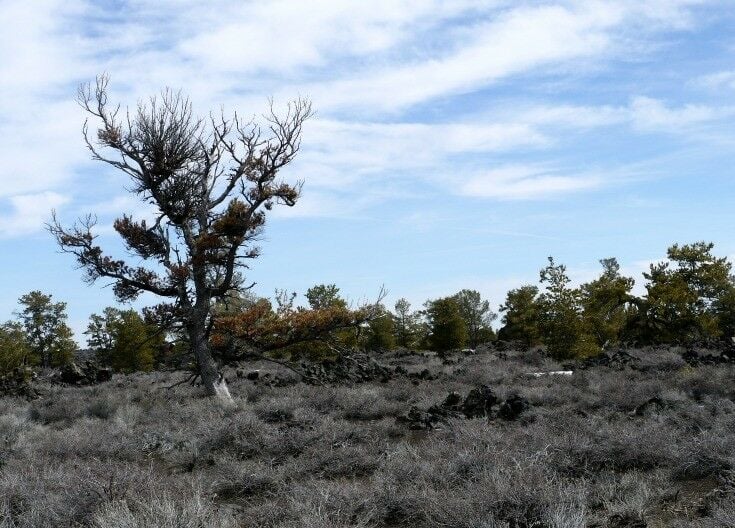 Because there was so much snow still on the ground, we only got to see a small portion of the Craters of the Moon. We hope to return when everything has thawed out to explore the cave trails, which sound amazing. 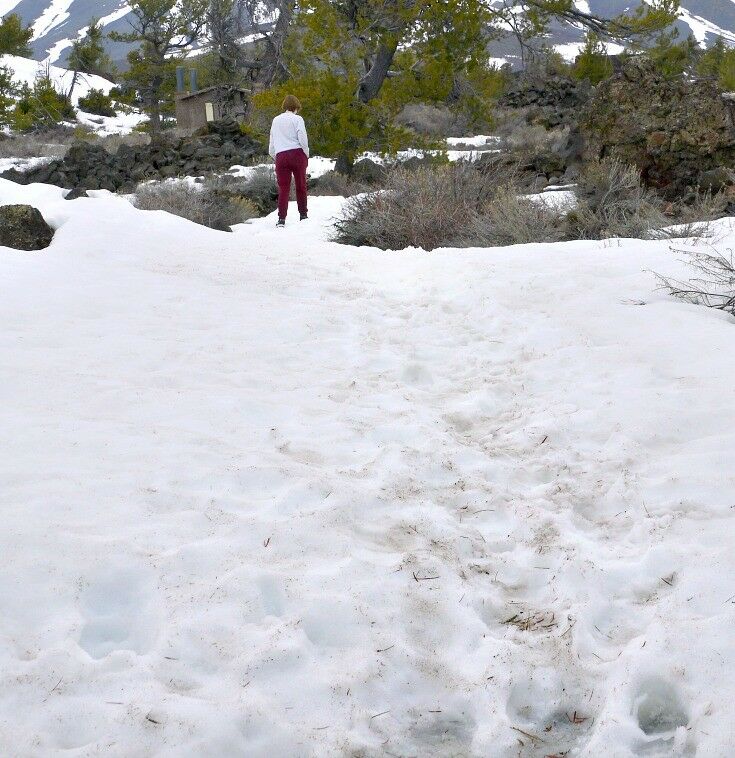 How to Get to Craters of the Moon

Craters of the Moon National Monument & Preserve is located in eastern Idaho, about half way between Arco and Carey, on US Highway 20/26/93.

The Visitor Center is open daily from 8 a.m. until 4:30 p.m. The physical address for the visitor center is 1266 Craters Loop Road, Arco, Idaho.

For maps and further information, please visit the Craters of the Moon website. 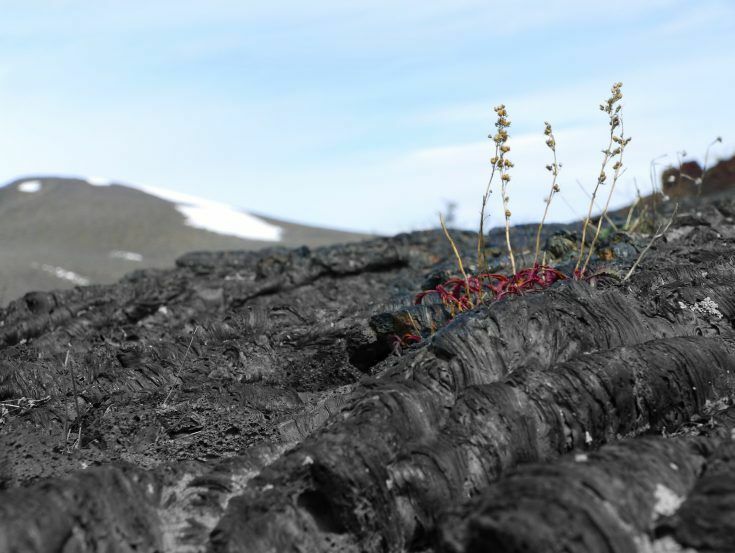