Visitors to Orenco Woods Nature Park can choose from wide variety of activities, including hiking, bicycling, geocaching, picnicking, and enjoying the native wildlife. (Oh, and hangin' out with giant Twig People. Don't about forget them.) 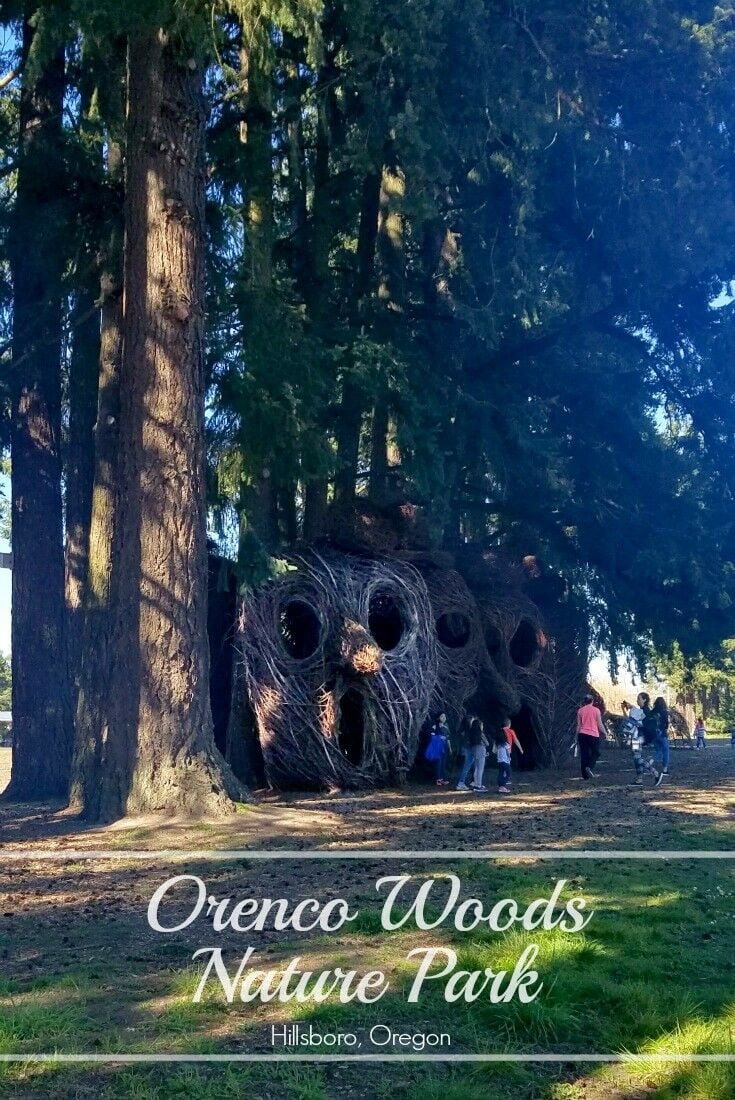 Last weekend was absolutely Bea-u-tiful here in the Pacific Northwest, so Mr B and I decided to go and explore Orenco Woods Nature Park, a new westside neighborhood park that has been getting a lot of local press attention lately. Here's just one reason for all the buzz... 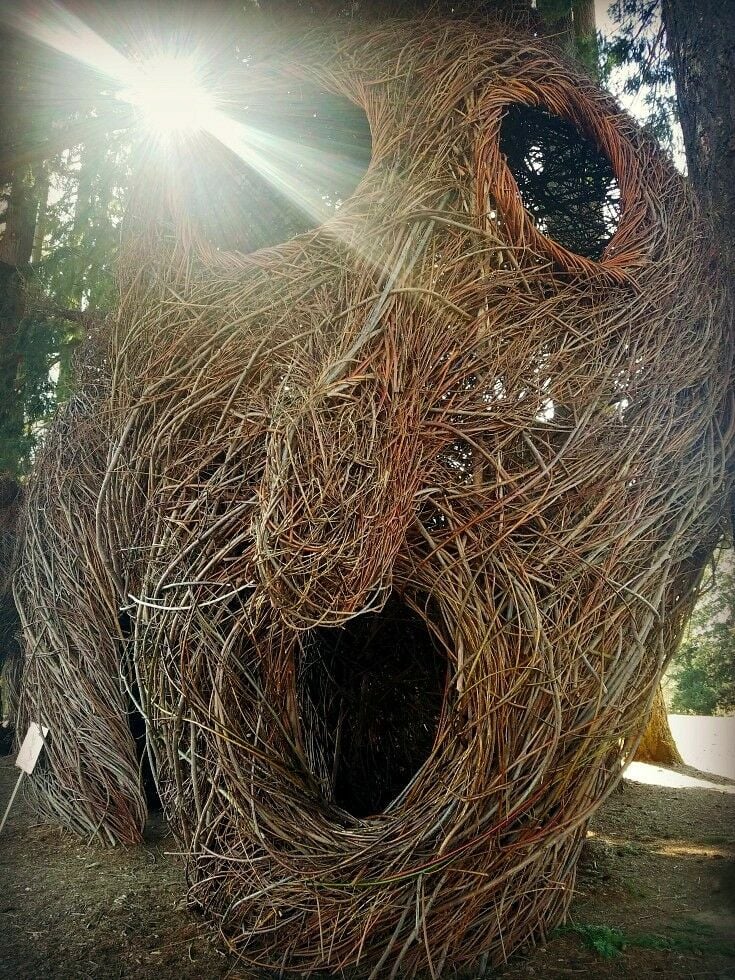 But I'll get back to Hungry Twig Guy later. First, let me take you on a tour around the park. 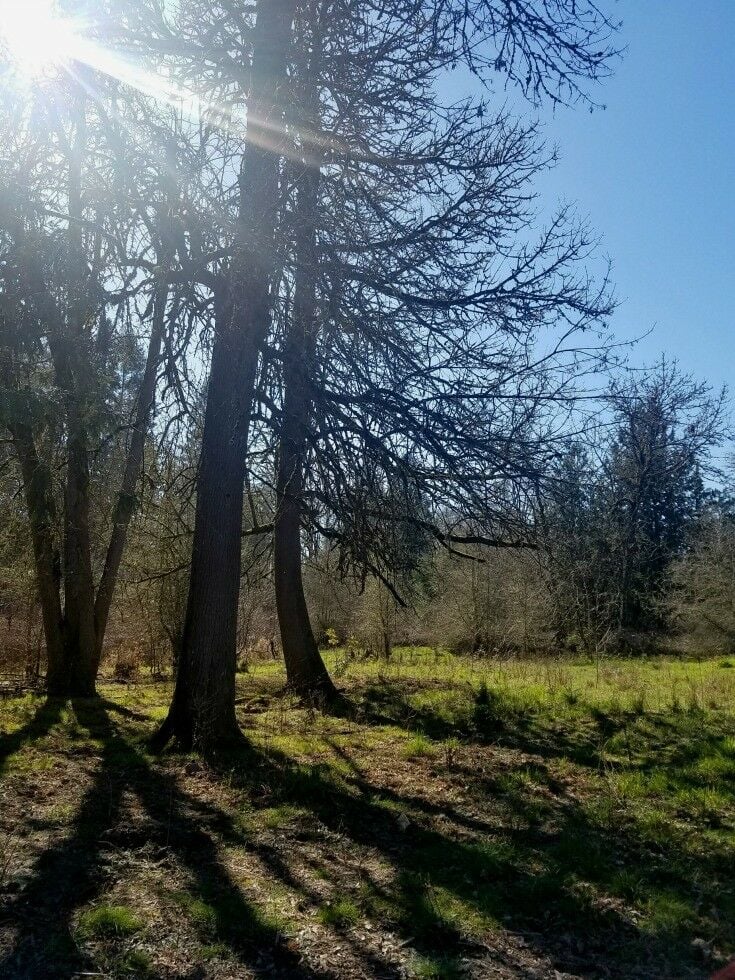 Orenco Woods Nature Park is a large neighborhood park located in Hillsboro, Oregon, about 30 minutes west of Portland. The 42-acre park is situated on the site of a former nine-hole golf course, between Orchard Park upstream and Noble Woods Park downstream. Rock Creek flows through the park, and Rock Creek Trail snakes through it. 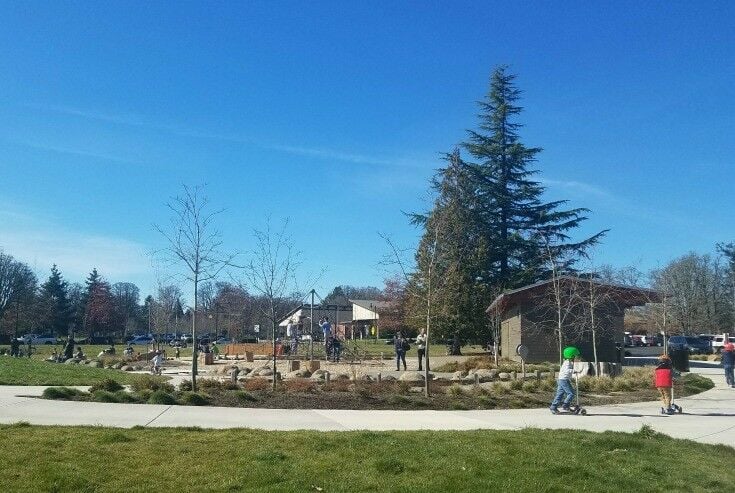 There is a big, open playground near the entrance to the park, with restrooms and drinking fountains for visitors, as well as a large covered picnic area.

This concrete stream channel was one of my favorite features of the playground - it runs downhill alongside one long side of the playground, with strategically placed water pumps set along the "stream bed" that allow kids to feed into the stream with running water during warm weather months, with the water pouring back into Rock Creek after it runs its course. The playground also features sand areas, logs, a large net climber and swings. 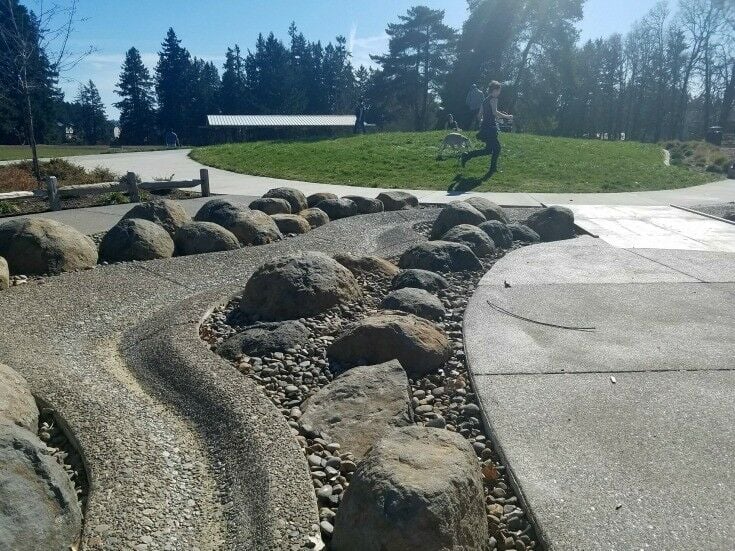 The "real" Orenco Apple is a high-quality dessert apple that was introduce to the world c.1840 by the Oregon Nursery Company. The apple is prized for its tender, crisp and juicy flesh, and sweet, piquant flavor.

The McDonald House, which sets inside Orenco Woods Nature Park near the park entrance, was built by Oregon Nursery Company Co-founder Malcolm McDonald. Mr. McDonald erected the sprawling Craftsman-style home in 1912, and his business then sold smaller lots to its employees, who built their own houses nearby. 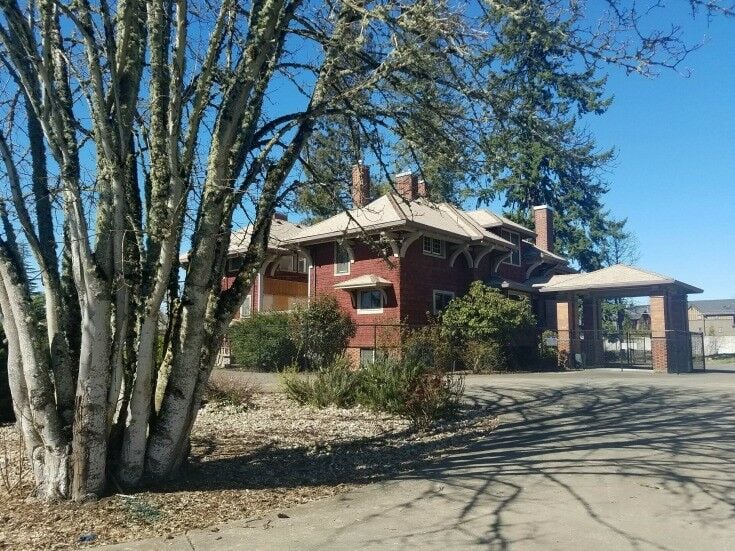 I had some brief contact with the McDonald house back in the early 2000's when one of my Girl Scout Troops (I had four) did some volunteer work there. At that time, the house was being used as a shelter and home for young, single mothers. The shelter closed in 2012 when the organization that ran it moved to another location. 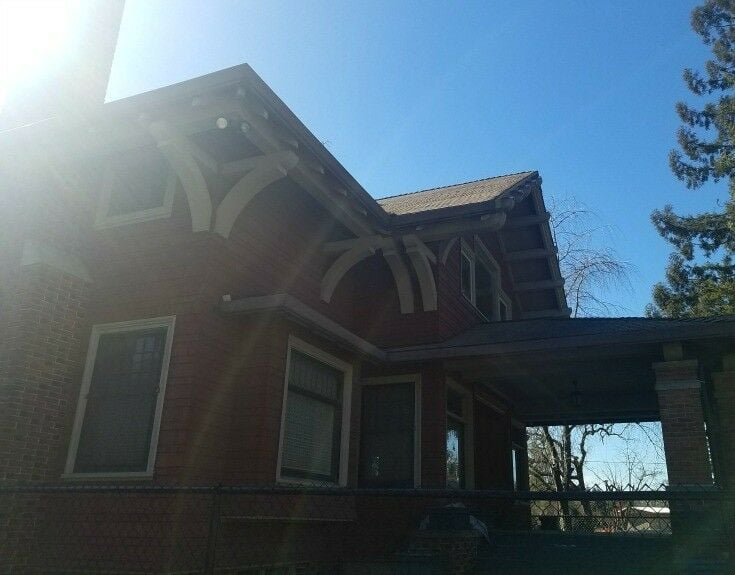 Despite the fences, I was glad to see that Hillsboro is taking steps to restore it to its former glory. Planners have proposed exhibiting Orenco's history in the house and renting it out for private events such as weddings. 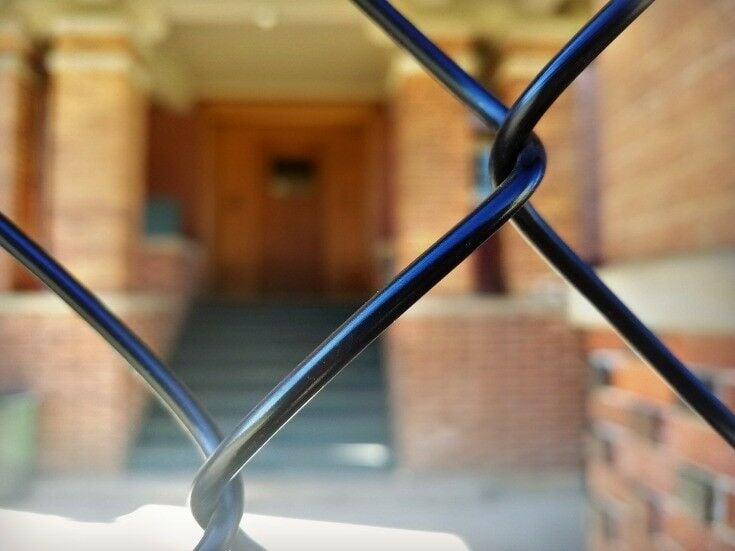 In 2015, the McDonald House was added to the National Register of Historic Places. 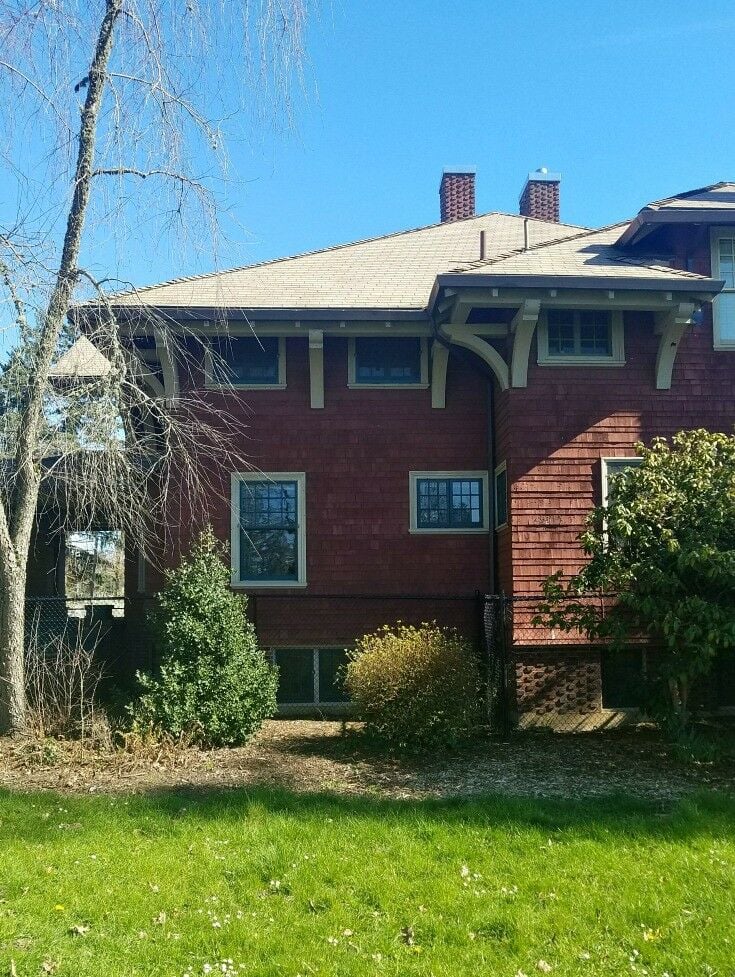 A segment of the paved, ADA-accessible Rock Creek Trail runs through the park, connecting to Orchard Park and to the Rock Creek Trailhead at Rock Creek Boulevard just north of Highway 26. You can also walk the much shorter loop around the Orenco Woods Nature Park using the park's graveled Habitat Trail. Bicycles and on-leash dogs are allowed on the paved trails, but not on the habitat trails [wood chip and gravel]. 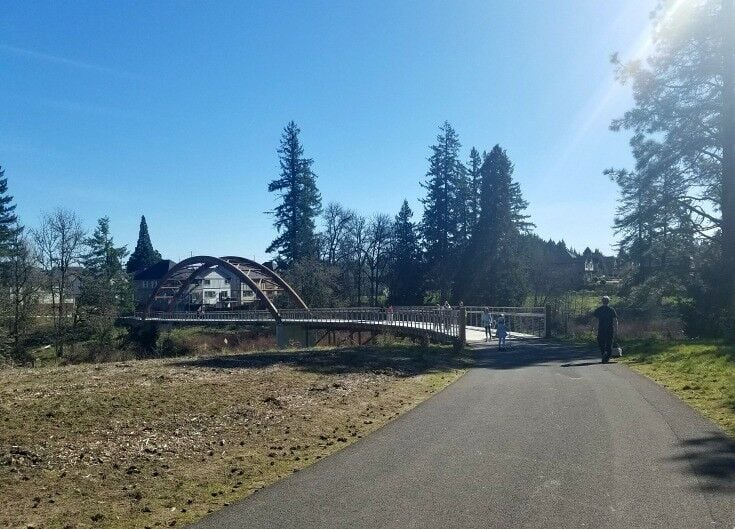 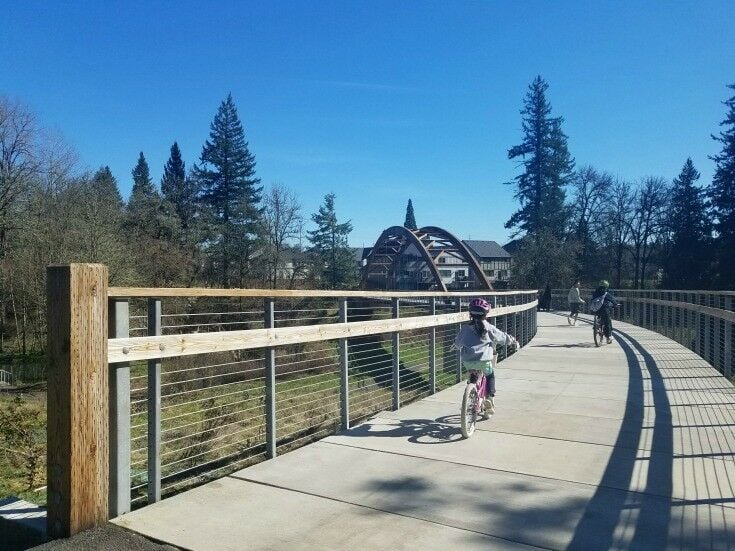 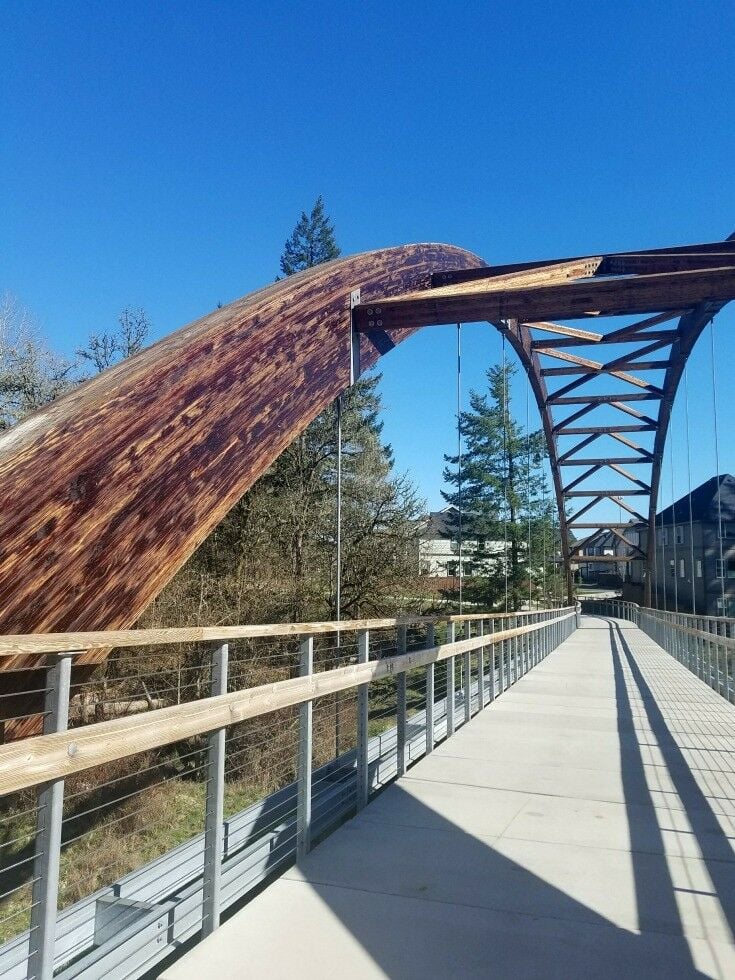 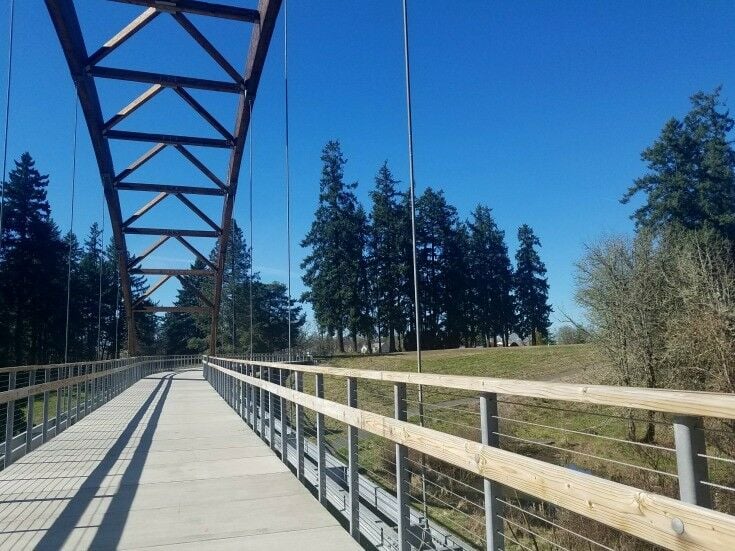 Orenco Woods Nature Park offers visitors a variety of experiences: rolling hills, open meadows, riparian habitat, and forested areas that are home to a variety of birds and wildlife. 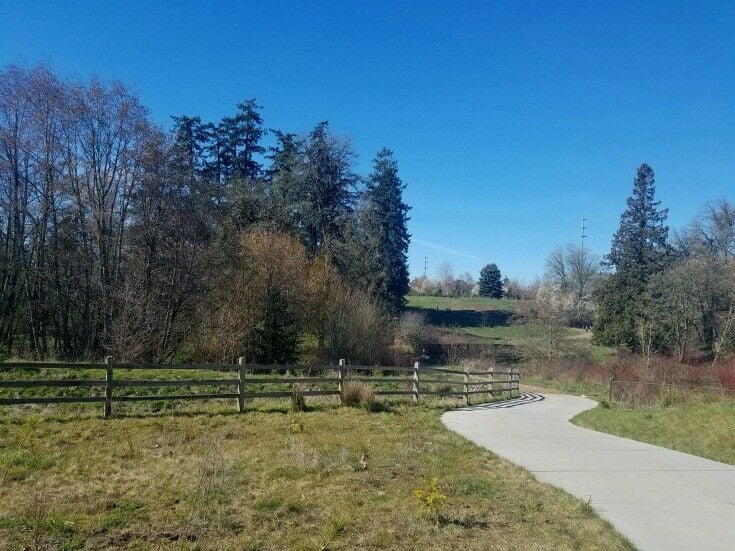 As we walked through the park, Mr B reminisced about the times he had golfed there in years past. "That course was always so wet. I remember that there was a par-three hole where you teed off from a box uphill to a mounded green below. When it was rainy, the green would be entirely surrounded by water." No wonder the golf course didn't last too long! 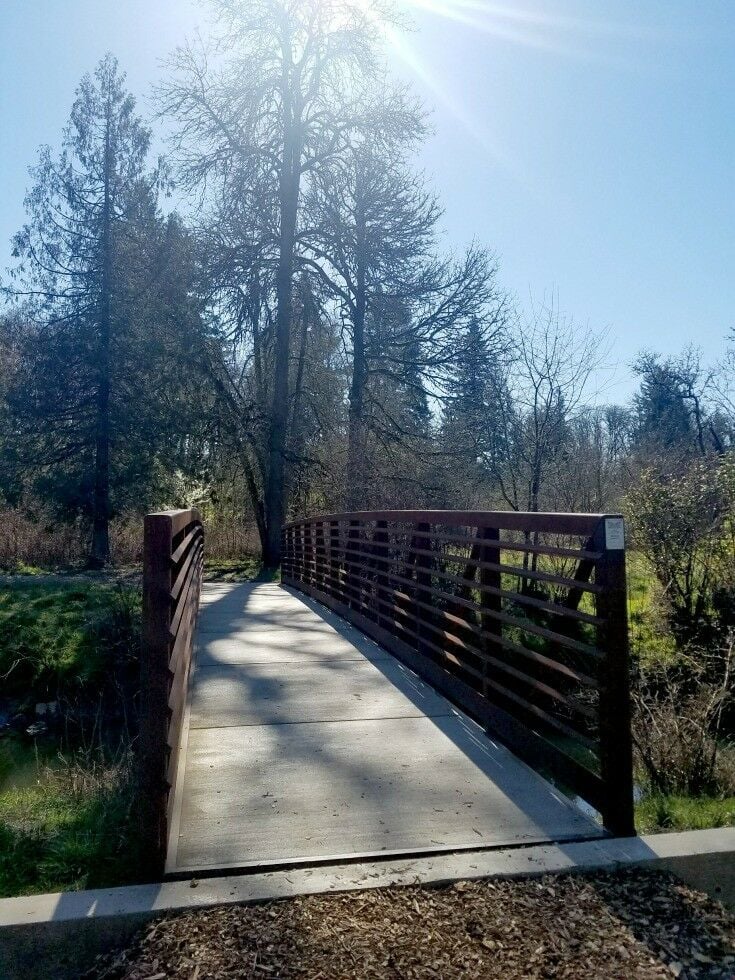 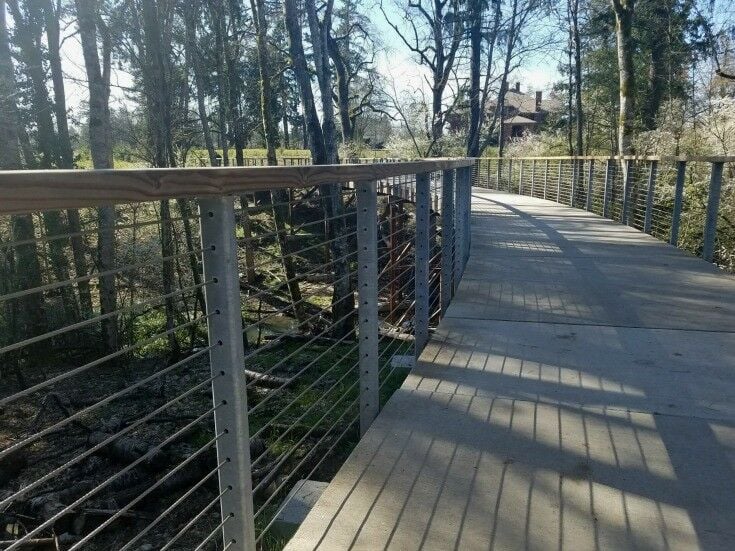 Now that we've made it around the park, let's circle back to that giant face made out of twigs...

This guy is just one of seven 18-foot tall faces that guard a line of old growth Doug firs along the stretch of main path that runs from the park entrance to the large arched bridge.

Created by artist Patrick Dougherty (along with a battalion of volunteers), the interactive art installation is constructed entirely from locally obtained twigs and branches. 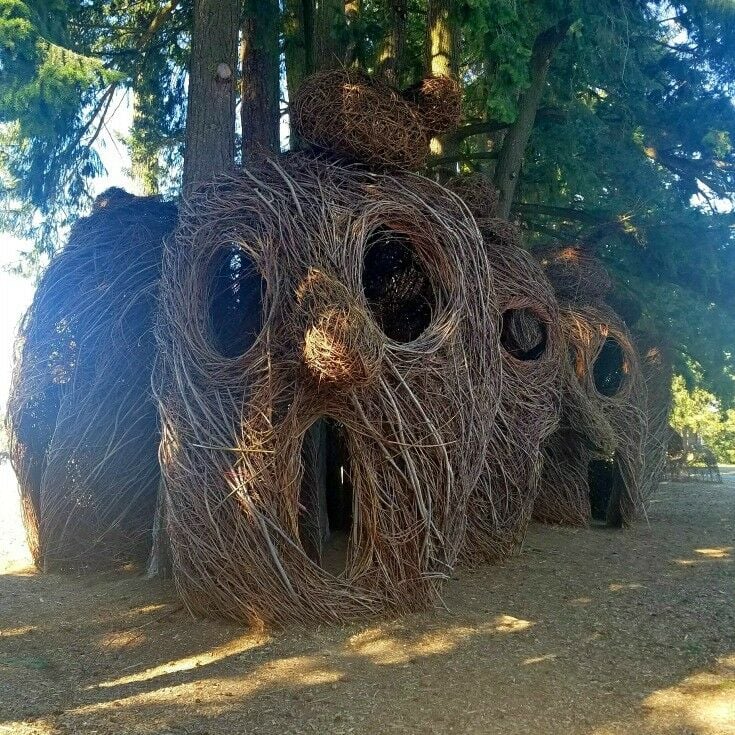 The piece was initially inspired by masks and totems of Northwest indigenous peoples; however, inspirations changed along the way. Says Dougherty, "they morphed during the building process into caricatures of human surprise. The arrangement of elements corrals the trees and creates among them a room of ancient tree trunks, thick and luxurious. Perhaps this invitation to rub shoulders with the craggy bark of such oldsters is the best part of the work. At the last minute, a hint of the heads of Easter Island statuary emerged as we fitted each head with a suitable hat.” 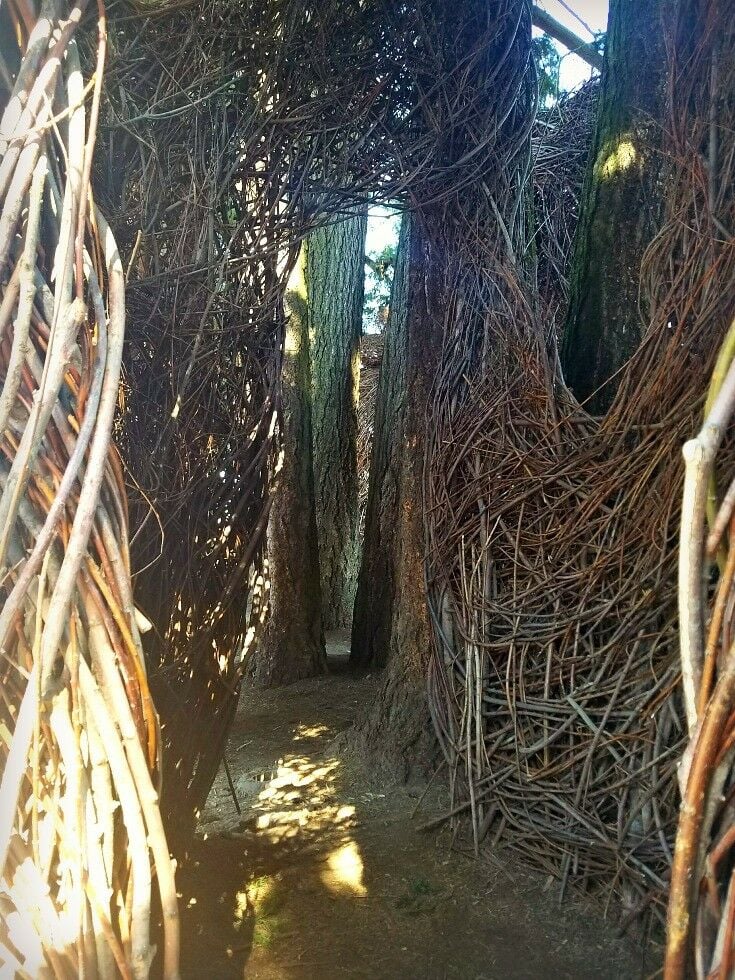 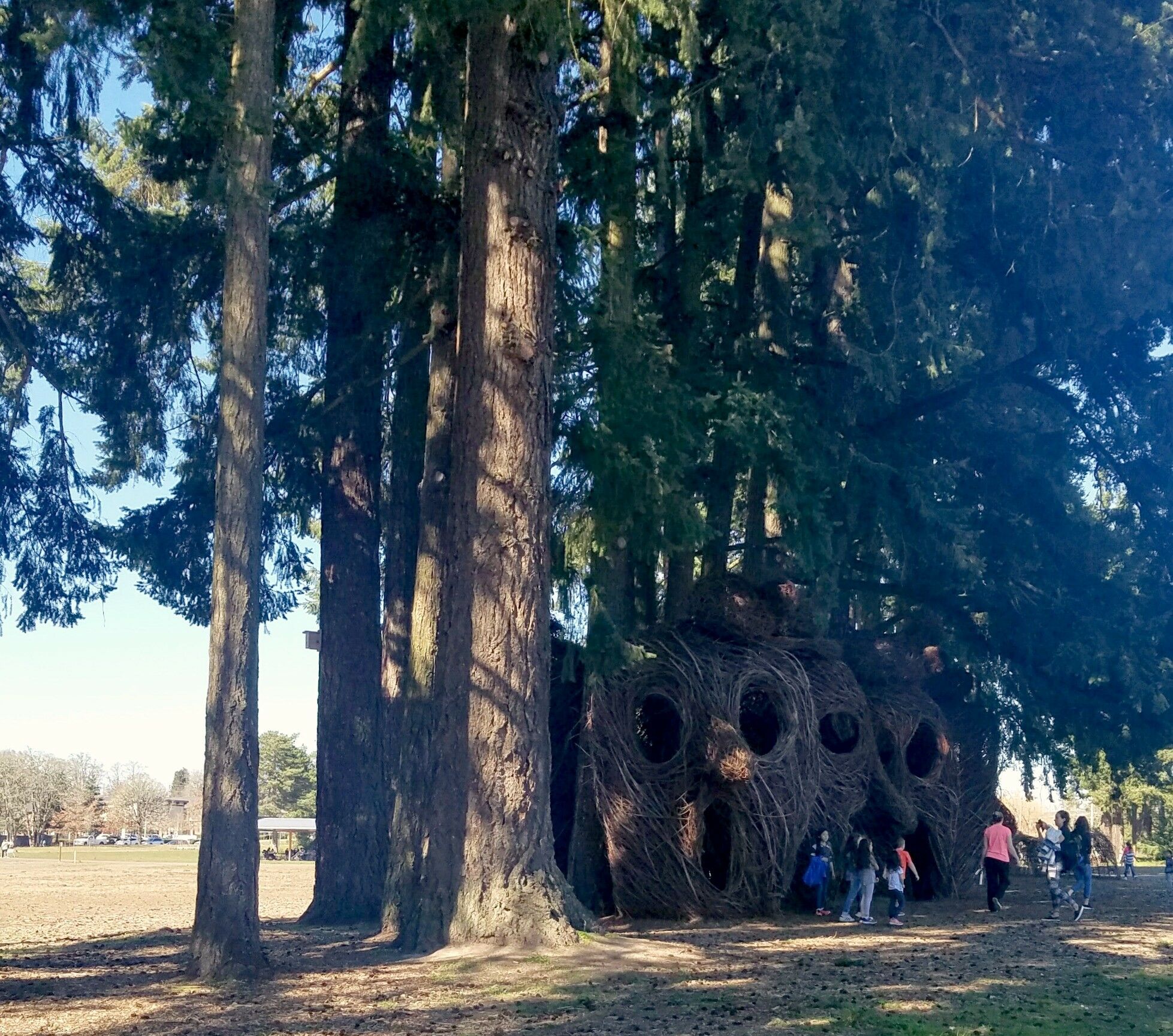 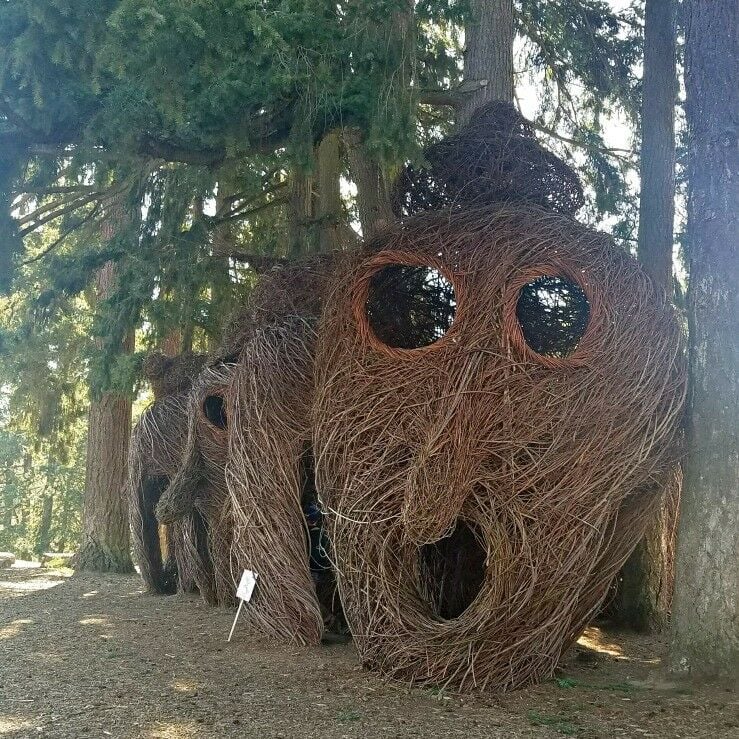 In addition to hiking the Rock Creek Trail and hanging out with giant Twig People, visitors can choose from wide variety of activities at the park, including hiking, bicycling, geocaching, and picnicking. Or kick back and enjoy the native wildlife: great blue heron, beavers, red-tail hawks, black-tailed deer, and more all make their homes along Rock Creek and in the adjacent wetlands.

Please leave a comment below! ? What unique parks are in your neighborhood?