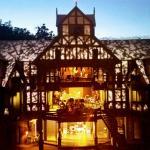 Ashland, Oregon: where culture runs deep, local cuisine is celebrated, creative inspiration is bountiful, and thespians are the coolest kids in town.

Ashland, Oregon is more than just a touristy little town with a world-class repertory theater and a pretty park. It is a place where culture and memories run deep, creative inspiration is bountiful, local cuisine is celebrated, and Shakespeare reigns.

I still remember the first play I attended in Ashland, many years ago in the Angus Bowmer Theater. It was “Our Town,” Thorton Wilder’s 1938 classic play-within-a-play, set in fictional Grover’s Corners around the turn of the 20th century. I went with my favorite aunt, who had been raised in a small town not unlike Grover’s Corners, adding yet another layer to Wilder’s theatrical onion and offering us abundant fodder for our post-theater conversation.

That weekend, in addition to strolling the shops and lunching in Lithia Park, we attended Shakespeare’s “Taming of Shrew” and George Bernard Shaw’s “Major Barbara” as well. I recall the three days we spent in Ashland as some of my fondest times with my Auntie.

Recently, I’ve had a number of opportunities to revisit Ashland, and while much has changed in the years between my first play and my most recent, much remains the same: the beautiful scenery, the vibrant arts scene, and above all, the cheerful, welcoming community.

If you are planning a visit to Ashland, here are a few must-dos to put at the top of your list:

"One touch of nature makes the whole world kin."
– from Troilus and Cressida

Set in the center of Ashland adjacent to the theater area, this 125-year city park is daily from dawn until 11pm.

If you are the sort of person who likes to have a plan, I suggest that you check out the Lithia Park Trail Guide online. Printed guides are also available for purchase at the following locations:

Rejuvenate [or maybe not]: Lithia Water

"Glory is like a circle on the water, which never ceaseth to enlarge itself, till, by broad spreading, it disperses to naught."
– from Henry VI, Part 1

In the early 1900s, the residents of Ashland discovered that their town sat smack next to a lithium-rich spring. At the time, lithium was being touted as a health tonic, and the city tried to capitalize on this trend by building a health spa. Soon however, plans were abandoned as the lithium fad faded.

You can try lithium water today at the downtown Plaza at the northern most tip of Lithia Park, where a multi-spout “Lithia Water” fountain still stands.

Pro-Tip: Be forewarned – [in my opinion] Lithia Water tastes terrible, kind of like that egg salad you left in the fridge a couple too many days.

"I like this place and could willingly waste my time in it."
– from As You Like It

"Tis an ill cook that cannot lick his own fingers."
– from Romeo & Juliet

The Greenleaf Restaurant has offered delicious vegetarian, vegan, organic, gluten-free, & carnivore dining options on Ashland's Plaza for more than three decades. It's a great place to pick up a fresh, locally sourced salad or tasty sandwich.

Everything on the menu is available to go, and if you ask them nicely, they will even pack you a marvelous picnic lunch to take to Lithia Park!

"Live a little; comfort a little; cheer thyself a little."
– from As You Like It

Sidelight: A mural depicting the highlights of Ashland was dedicated June, 2018 in Guanajuato, Mexico.

"Dost thou think, because thou are virtuous, there shall be no more cakes and ale?"
– from Twelfth Night

Surprisingly, Ashland is a little like the theater district in Manhattan, in that before showtime, restaurants fill up with well-heeled theater-goers out for a night on the town, and empty once the show doors begin to open.

One of the most popular places in Ashland for a before-the-theater meal is Larks, located in the beautiful, historic Ashland Springs Hotel.

One of Chef Franco’s guiding tenets is “know our farmers,” and he is passionate about creating a connection between his restaurant’s guests and local farmers, ranchers, distillers, and winemakers.

Out on the Town: Shakespeare & Beyond

I wonder if Angus Bowmer had a glimmer, when he put on Ashland's first three-day Shakespeare Festival back in 1935, of what his vision would become, and how it would someday shape everything – from pop culture to politics – for his town and far beyond.

“There are more things in heaven and earth, Horatio, than are dreamt of in your philosophy."
– from Hamlet

Visiting Ashland during Shakespeare Festival season and not seeing at least one play is like visiting Paris and not seeing the Eiffel Tower. It simply isn't done. But don't worry if Shakespeare isn't your jam, because the Festival puts on a broad selection of productions - everything from classic, long-bearded tragedies to fresh, provocative comedies to political activist dramas, and everything in between. There is sure to be something on the lineup that will bring you to your feet.

With a season that now stretches from February to October, the Oregon Shakespeare Festival is the largest repertory theater in the United States. Visit the OSF website for information about tickets and plays.

Disclosure: My dinner at Larks and ticket to Beauty and the Beast were complimentary as part of a Travel Oregon press trip. As always, all opinions and images are my own. This post may contain affiliate links, which means we may receive a commission if you click a link and purchase something that we have recommended. While clicking these links won't cost you any extra money, they do help keep this site up and running, and at the same time allow us to keep traditional advertising to a minimum. Please check out our disclosure policy for more details. Thank you for your support!