Hey Portland, remember that one gloriously bright sunshiny day we had a week or so ago?

You know the one. (Because there really was only one.) Well, Mr. B, Em and I jumped on it and took our first walk across our newest bridge – Tilikum Crossing, Bridge of the People. 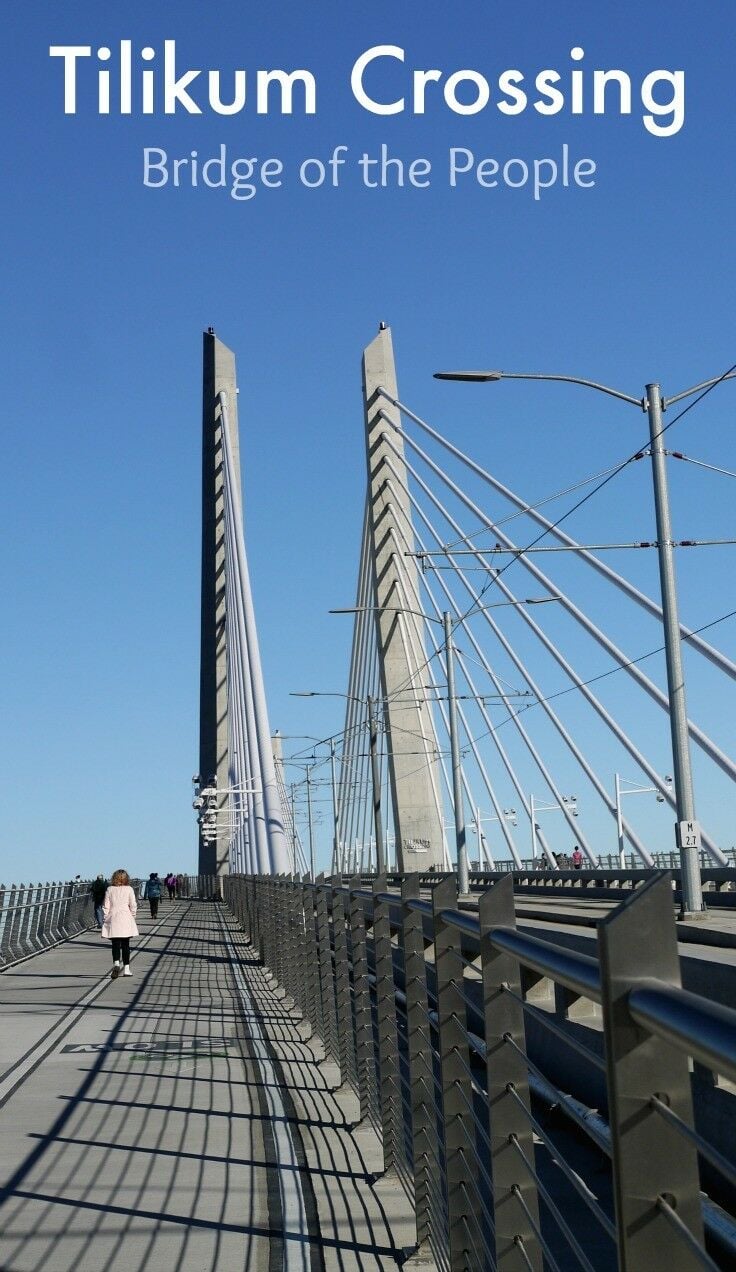 Tilikum Crossing is a car-free pedestrian and transit bridge, making it the first of its kind on the United States. 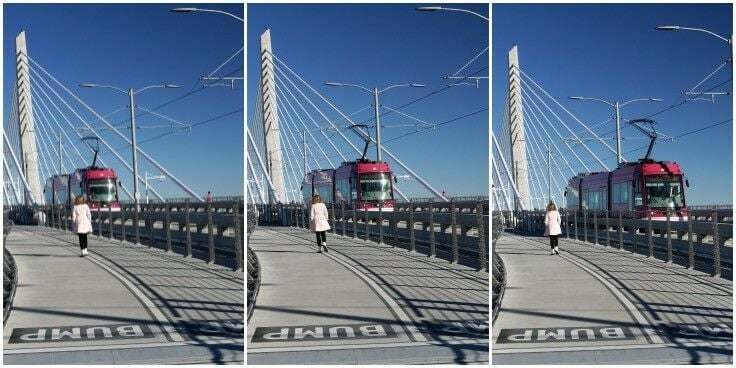 Our third-mile walk across the bridge was lovely, and included some beautiful views of Mount Hood. 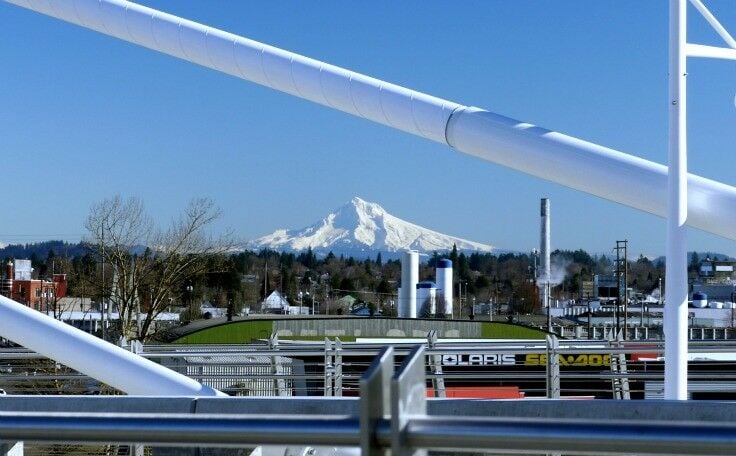 The light, airy structure of Tilikum Crossing stands in bright contrast with its neighbors. To the south is the Ross Island Bridge, with its imperial ironwork towers, and to the north the Marquam and its stark Cold War vibe. (The Marquam is my least favorite bridge ever.) Next to them, Tilikum Crossing rises from the Willamette as fresh and vibrant as a teenage girl at a retirement home dance.

Truly a Bridge of the People, Tilikum Crossing’s name is significant.  Historian Chet Orloff, chair of the committee that named the bridge, says the name was selected because it connects our region’s past with the promise of its future.

Tilikum is the Chinook Wawa word for “people” — hence Bridge of the People. [It] symbolizes coming together. It conveys connections, in not only the relationships between people, but in the connections we will make as we ride, walk, run and cycle across this beautiful new bridge. 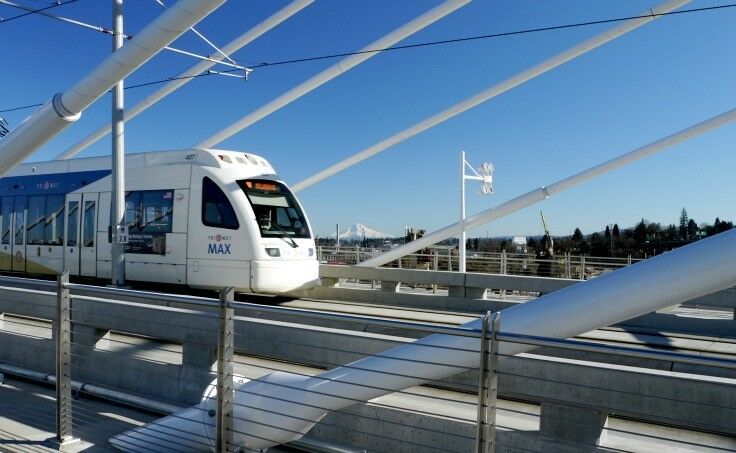 The bridge is design to safely carry pedestrians and cyclists, as well as light rail and streetcar riders between the South Waterfront, Lair Hill, the Brooklyn neighborhood and the inner Division area. 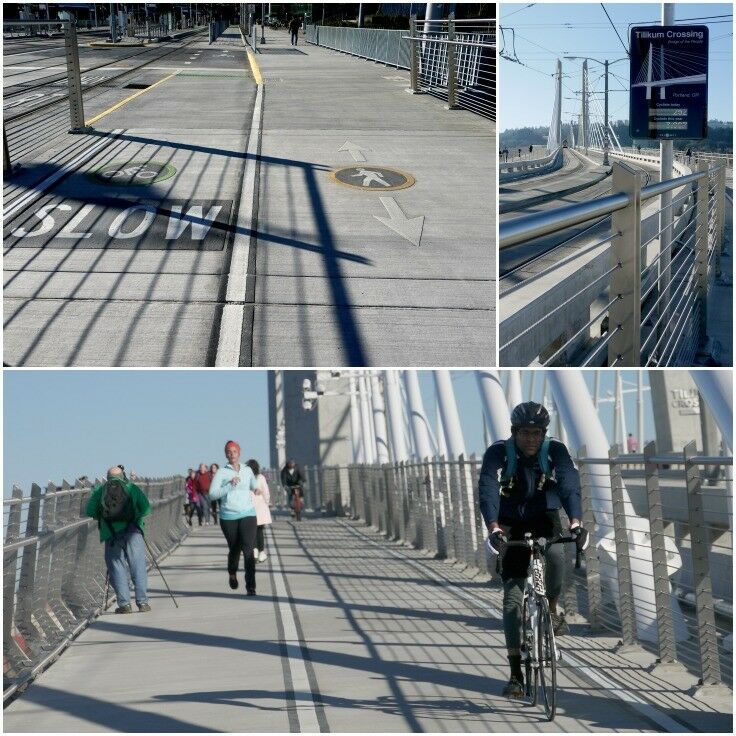 Generous 14-foot-wide paths, one on each side of the bridge, are designated for cyclists and pedestrians. In addition to the dedicated bike path, there are also several bike-only signals, as well as a electronic cyclist counter that tallies how many cyclist ride across the bridge each day, as well as giving a grand total since the opening last September.

Portland, however, is a town known as much for its readers and writers as its cyclists. This quote – stamped into the sidewalk at the east end of the bridge – evokes Walt Whitman's famous poem celebrating the glories of existence, the interconnectedness of body and soul, and the oneness of all people. 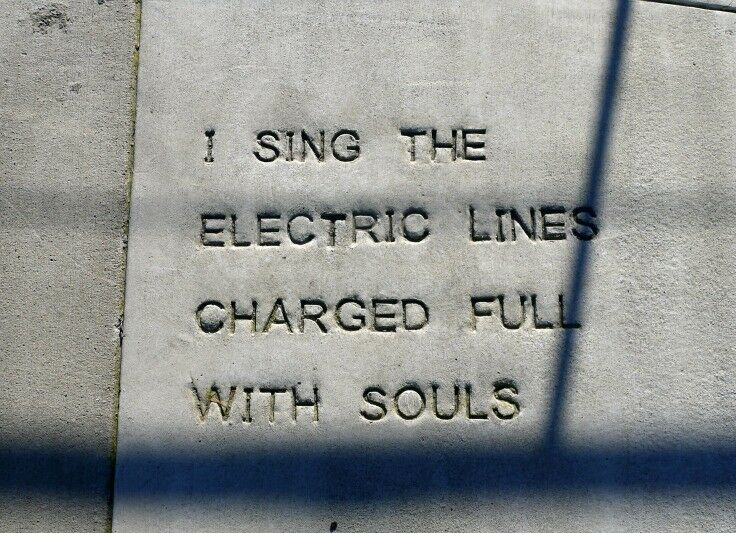 I sing the body electric,
The armies of those I love engirth me and I engirth them,
They will not let me off till I go with them, respond to them,
And discorrupt them, and charge them full with the charge of the soul…

We are really looking forward to taking an evening stroll along the Waterfront when the weather starts to warm up so that we can fully enjoy Tilikum Crossing after dark. That’s when 178 LEDs, controlled by an aesthetic lighting program, illuminate the bridge. The lighting program pulls data from the USGS river monitor and adjusts the lights’ colors according to the water’s height, speed and temperature. How cool is that?!?

For more information on Tilikum Crossing, visit How We Roll [News for Trimet Riders].