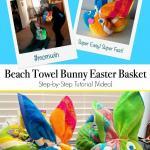 This easy Easter basket idea is perfect for kids young and old! Fun, practical, inexpensive, and SUPER easy to make!

Why You Will Love this Easy Easter Basket

The Easter bunny observes no age limits at our house. If you call me Mama and you stay over at my house on Easter Eve, the Easter Bunny will leave you a basket, no questions asked. (To clarify, you do have to be one of my kids, or at least a close friend.)

However, it can be a real challenge to create a simple Easter basket for teens, tweens, and young adults. One they are excited to receive, that is. And one that isn't a huge drain of money and resources.

So I'm always on the lookout for practical Easter basket ideas that won't just create more trash at the end of the day. That's why I was so excited a few years ago when I looked in a downtown storefront window and saw what looked to be a giant booboo bunny.

What a great idea! I mean, who can't use a plush new towel?! I took the idea and ran with it, and this is the result!

You will love this simple Easter basket idea because:

So, what do older kids really think of these fun Beach Towel Easter Baskets? You be the judge...

What You Need for this DIY

You can set the tone for your Easter basket with the towel you choose, or match it to particular color scheme or theme.

For example, I wanted my towel bunny baskets to be big and bright, so the first thing I did was find some plush, colorful beach towels.

TIP: Many stores (including Costco) start putting their summer goods out just before Easter, so the timing for this easy project is spot on!

How to Make this DIY

These cute Easter baskets are SUPER easy to make and take only about 10 minutes to put together!

Adhesive-backed felt is an easy option for this step, especially if you don't sew or want to put glue your towel.

Cut the adhesive-back felt into simple eye and nose shapes and set aside.

Options for Eyes and Nose:

You don't need anything fancy. Use whatever you have on hand. The whole point is to give the bunny a face with some personality!

Form a square by folding the beach towel almost in half, hamburger-style (i.e., the short way: hotdog style is the long way).

With any towel overlap turned to the inside, fold the towel in half corner to corner, forming a triangle.

Starting at the 90-degree point of towel, roll the towel toward the long side (the hypotenuse).

It's important to roll the towel gently - not too tight, not too loose.

When you are done rolling the towel, you will have a fat side, and a thin side on the roll.

As you are creating your bunny, the thin side will always stay to the interior. It will eventually provide structure for the bottom of the basket.

Secure a large rubber band to a large pompom. (Most of the pompoms usually come with a little loop already on them, but it isn't big enough to allow the rolled towel to pass through.)

Find the middle of the rolled towel by folding it in half, always keeping the thin side of the to the inside.

Thread the rolled towel through the rubber band until the pompom rests on the fat side in the middle of the roll. The pompom should be on the outside of the roll, but other than that, don't worry about placement too much until you've finished the Step 7 and Step 8.

With the pompom tail now attached, fold the rolled towel in half, keeping the “thin side” in.

Using a large rubber band, secure the two halves together about ½ way between the middle bend and the tips of the roll, forming the round bunny-body-basket.

The towel ends beyond the rubber band will form the face and ears.

Fold the unsecured ends back over the Basket Rim you just made, and secure with a large rubber band.

This rubber band should be placed directly over the first rubber band as it secures the face to the body.

Shape the bottom of the basket by pushing the thin side (the inner basket rim) down to form a flat floor.

This is when your bunny's personality starts to take shape. You can make the face full or thin, and the ears short or long.

Add the eyes and nose that you prepped in Step 1. Simple as that.

Chocolate eggs is always welcome, but here are a few non-food ideas (sticking with the Beach theme):

NOTE: If you are unable to find/get adhesive-backed felt for the eyes and nose, you can easily make some. Simply trace and cut out some eyes from fabric or paper, and then temporarily tape them, or tack them onto the bunny's face with needle and thread.

Did you make this project?