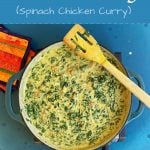 Chicken Saag (Spinach Chicken Curry) is a delicious, aromatic blend of spinach, chicken, and warm spices. Easy to make and ready in less than an hour, this creamy simmered curry is destined to be a new family favorite!

In late 20th-century Portland, before the renaissance of food carts and pop-up cuisine, Saturday Market food stalls and mall food courts were about as exotic as food got. Especially if you were young and on a tight budget. Throughout the nineties and early noughties, my mom-friends and I would regularly pack our toddlers and preschoolers over to the local mall to grab lunch.

Back then our family favorite was the Spinach Chicken Curry at Bombay Express. Not only was their spinach chicken always delicious, but it was one of the few meals that everyone could agree on! (Portions were huge, too, so a couple of kids could share.) I've been wanting to try to figure out how to make this recipe forever.

Why this Recipe Works

I started by consulting Madhur Jaffney's 100 Essential Curries for inspiration and direction, and then I set out to recreate the "Washington Square Mall Spinach Chicken" we all knew and loved.

After a few initial batches to calibrate the spices and hone the process, I took a plate over to my friend Michelle for feedback. (Michelle is my long-time Mom-friend, 90's Mall buddy, and frequent recipe-development taste-tester.) She pronounced the effort "yummy" but "a little warm for my tummy." Also, she noted that it was "missing a subtle something...the cozy undertone."

That's when it hit me: the spinach chicken we had raised our children on was "Mall Spicy." I had based my ingredient list on traditional saag and palak recipes. In order to recreate the memory and achieve that sublimely cozy something for which Michelle hungered, I had to make a few adjustments.

Following the recipe below results a rich, creamy, cozy spinach chicken curry with only the slightest kick. (This is why even our toddlers gobbled this stuff up!)

However, if you like your chicken saag spicier, it's easy to level up the heat:

One further break with tradition (in the name of recreating that cozy Mall Spinach Chicken memory): the recipe below includes a couple teaspoons of brown sugar, which (as all of my daughters will tell you) is the secret ingredient in everything.

Chicken Saag or Chicken Palak? (And what's the difference?)

Our Spinach Chicken recipe is a hybrid of Saag and Palak.

Essentially, Palak is a type of Saag in which spinach is its main greens ingredient. There are a few other minor distinctions involving the spices and type of dairy used, but when referencing various Indian cookbooks, these definitions seem negotiable. In fact, depending on the source/definition, this recipe can go by many names: Saag Chicken, Palak Chicken, Saagwala Chicken, Palak Murgh, Saag Murgh, Spinach Chicken Curry.

"Saag" is a Punjabi term for a recipe that uses green leafy vegetables in its preparation. Leafy greens can include spinach, mustard greens, turnip greens, Swiss chard, collard greens, kale, and fenugreek leaves, among others. Cream is the primary dairy component in saag, making its overall flavor and texture more creamy and velvety.

Traditionally, "Palak" is a term that is used for curries made specifically with spinach. Palak, however, usually doesn't usually include garlic, and the spice profile is more limited. Yogurt is the primary dairy component, which gives palak its distinctly tangy flavor and makes the curry somewhat drier than saag.

Is this Spinach Chicken Curry recipe a Saag or a Palak?

★ Chicken: We usually use boneless, skinless chicken thighs in this recipe. Chicken breasts have a tendency to dry out too much when simmered for any length of time.

Chicken should be cut into strips about ½" wide. We try keep the length to the strips to about 2-3 inches max.

★ Garam Masala: Garam masala, which roughly translates from Hindi to "warm spices," is a culinary spice blend widely used in Indian cuisine. Whole spices, including cinnamon sticks, peppercorns, coriander seeds, cumin seeds, and cardamon pods are first toasted to activate their aromatic flavors, and then ground into a powder.

The mix of spices used to create Garam masala is as personal to a family as your grandma's spaghetti sauce, and ingredients can vary wildly.

This issue came into play when one of my daughters was testing out this recipe, and texted to ask about the garam masala. She had two different garam masala mixes, and each one listed completely different ingredients.

In the end, she used half of each, and was very happy with the results.

When using store-bought garam masala, I personally recommend Swad brand garam masala, the brand I used to develop this recipe. Swad Garam Masala can be purchased at almost any Indian foods store, or online. (FYI: Not sponsored; just my current favorite brand.)

Always use the freshest spices you can. If you are a DIYer, you can even make your own Garam Masala!

★ Yogurt: You may notice some yogurt in the lower left corner of the image above. It's totally optional: sometimes I add it if I want the saag to have a little tang, but most of the time I leave it out.

★ Jalapeños: Canned diced green chilies can be substituted for fresh jalapeños; especially if your partner eats all the jalapeños right before you shoot your pictures.

Set aside the seasoned chicken aside, and reserve the remaining Spice Mix for later.

From this point on, everything happens rather quickly, so you need to have everything ready to go before you get started.

Heat a large, heavy skillet over MEDIUM heat (or MEDIUM-LOW, depending on your stovetop).

Add the chopped onion to pan and cook, stirring frequently, until the onions are translucent and just barely start turning brown on the edges. (About 5-6 minutes, and up to 10 minutes.)

Optional: Instead of simply browning the onions, you can caramelize them. This will take about 45 minutes, but it does add another, deeper layer flavor to the end product. (You can read more about the difference between browning onions and caramelizing them by visiting our French Onion Soup recipe.)

Once the onions are cooked, add the minced garlic, ginger, and jalapeño. Stir and cook two minutes. Do not allow the garlic to brown, or it may become bitter.

The chicken will still be pink in places, but should generally look like it's a few minutes away from done.

Sprinkle remaining Spice Mix over the top of the chicken mixture and stir one more minute. (This step allows the heat of the pan to activate the ground spices. Don't skip it.) The chicken should appear just barely cooked through at this point.

Stir in half-and-half, mixing to combine ingredients. Once the mixture is evenly combined, reduce heat to LOW, and simmer chicken uncovered for 20 minutes, stirring frequently.

Chicken mixture should be kept at a very low simmer. Do not boil.

After chicken mixture has simmered for 20 minutes, begin adding fresh spinach a handful at a time, stirring it in as it begins to wilt.

(Frozen Spinach: If you are using frozen spinach, do not defrost the spinach first. Just add it all at the same time, and allow it to defrost in the heat of the sauce.)

NOTE: Spinach Chicken can be prepared up to a day ahead of time up to this point.

When you are ready to serve, bring chicken mixture to a gentle simmer over LOW heat. Add 2 tablespoons of butter or ghee to finished mixture, stirring gently to allow it to melt into the sauce.

Can this saag be made vegetarian?

Yes! We recently made this with paneer, and it was delicious! (That makes it Saag Paneer.) You can also make it with faux chicken, of course.

Instead of mincing garlic and grating ginger every time we make this dish, we use Ginger-Garlic paste instead.

Ginger-Garlic paste is a staple in Indian cooking; Since I first learned about it a decade ago, I've found dozens of uses for it. (Hint: it makes an amazing, super-easy marinade for just about anything.)

You can buy Ginger-Garlic Paste off the shelf, but if you want to DIY it, making your own is about as easy as it gets.

How to make your own Ginger-Garlic Paste

Put equal parts (by weight) peeled ginger and peeled garlic into a blender or food processor. Add just enough water (~¼ cup) to allow it the blades to move freely, and blitz until almost smooth. (I like to leave it a little chunky, but that's a personal preference.) Some people use vinegar or oil to preserve the ginger-garlic past longer, but I just use water.

Made with water-only, Ginger-Garlic Paste will last about 2 weeks in the fridge, and at least 6 months in the freezer.

(If you would like more complete directions, this is the resource/recipe I use: Quick Ginger-Garlic Paste.)

We like to serve Spinach Chicken with a simple basmati rice and naan.

You can make pretty turmeric rice by first cooking your rice, and then tossing about a ¼ cup of hot cooked rice with ¼ teaspoon of turmeric. Once the turmeric is completely mixed throughout the rice, add the yellow rice back into the rest of the rice and toss. 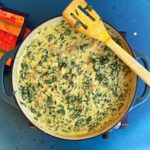 *You can omit the ginger and garlic and substitute in 2 tablespoons Ginger-Garlic Paste. This recipe was developed based on memories of the Chicken Saag at Washington Square Mall, Beaverton, Oregon.

For Laura, with love