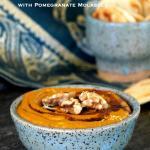 Muhammara, or Roasted Red Pepper & Walnut Dip, is a versatile, savory-sweet Middle Eastern dip. Delicious spread on pita or veggies, or as sauce for kabobs, this gluten-free, vegan version is amazing!

Muhammara, or Roasted Red Pepper & Walnut Dip, originated in Aleppo, Syria, and its principal ingredients traditionally include red peppers, ground walnuts, breadcrumbs, spices, and olive oil. However, this recipe - inspired by popular local pub fare - omits the bread crumbs, and instead uses roasted carrots to thicken and extend the dip.

Not only do the carrots keep this delicious savory-sweet dip gluten-free, but they give it a wonderful creaminess and earthy sweetness as well.

Inspired by Three Faces of Eve

Dottie and I ordered something called "Three Faces of Eve," (super-fancy hummus plate) and sat down to rehash the evening, poet by poet.

Forty-five minutes later, still no hummus plate. We finally got our waitress’s attention, and she (let's call her Alice) went to check on our order, only to return frantic and apologizing all over the place. Alice said she had no idea what happened but the kitchen never got our order.

"Is there anything I can do to make it up to you?" she asked us - at least seven times. In between apologizing, she kept up a steady train of chatter, trying so hard to be accommodating that it was driving us nuts. All either Dottie or I could think was, “It’s OK, we understand. Really. Just please stop talking.”

I almost got misty. This recipe had been on my wish list for years! I scanned the handwritten recipe briefly and then tucked it away, already calculating the Alice's generous tip.

It's a good thing my scanning skills are pretty tight, too; because somewhere between that Bagdad booth and my front door, Alice's little slip of paper completely disappeared.

Surprisingly, I took recipe loss in stride. In my quick perusal, I'd memorized the ingredient list, along with a general idea of the basic ratios.

In the long run, losing it wasn't entirely a bad thing. It forced me to really work each this recipe out for myself, and even take some pride in the result! I hope you enjoy our version of Muhammara as much as we do!

Pomegranate molasses is the one distinct, "secret" ingredient in this recipe, and what lends to its unique, savory-sweet flavor.

Called molasses not for its origins, but for its dark, syrupy consistency, pomegranate molasses is a thick fruit syrup made from pomegranate juice.

Pomegranate molasses is a bit like a less sweet, less tangy balsamic reduction, and I find that I can use it anywhere I would use a good balsamic glaze. Until I started making muhammara at home, I'd never even heard of pomegranate molasses. Since then, I've found a number of delicious uses for it.

★ Carrots: Carrots are not a traditional ingredient in muhammara; however, this recipe uses carrots in place of breadcrumbs to thicken and extend the dip. For this recipe, I chose to roast the carrots before blending them into the dip, instead of simply boiling them as my original notes indicated.

Not only do the roasted carrots pair perfectly with the walnut-pomegranate flavors to make this savory-sweet dip gluten-free, but they give it a wonderful creaminess as well.

★ Pomegranate molasses: Probably the most unusual ingredient in this recipe, pomegranate molasses is a household staple in many Middle Eastern kitchens. It has a truly unique flavor, and can be used for glazes, salad dressings, and even barbecuing.

You can find pomegranate molasses at specialty stores or online. And before you even ask: no, here is no good substitute for it.

Cover a baking sheet pan with a Silpat mat or parchment paper and spread the prepared vegetables out in a single layer. Sprinkle 1 tablespoon of olive oil over vegetables and toss to coat. Season vegetables lightly with kosher salt and ground cumin.

Roast vegetable in preheated oven for 45 minutes, turning once halfway through. Remove from oven and allow to cool. Once vegetables are cool, remove peel from red peppers.

Heat walnuts in a dry, heavy skillet over medium heat for 2 or 3 minutes, or until nuts are golden brown and smell toasty.

Walnuts burn easily in a skillet, so be sure to stir constantly to ensure even toasting until the nuts turn a rich, golden brown. Remove walnuts from skillet and set aside.

In the same skillet, heat 3 tablespoons of olive oil over medium heat. Turn off burner, add the cumin and paprika, and stir in hot oil until fragrant - just a few seconds. Allow to cool slightly.

Put all ingredients into a food processor or blender and pulse until smooth. 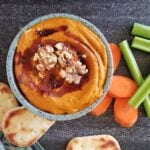 Put it all together

As with many things, the flavors in this dip benefit greatly by having a little time to blend. It can definitely be eaten immediately after making it, but If you are making this for a party, I strongly suggest doing so a day ahead of time to allow the flavors to mingle and come together. Serve cold or at room temperature.  If you prefer your dips a little chunkier, reserve one carrot and a handful of walnuts until after you have mostly pureed the mixture, then throw the reserve nuts and carrot in and pulse for a few times to combine.