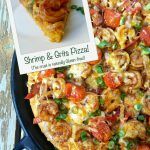 Shrimp and grits is a Southern classic. A dish once served almost exclusively below the Mason-Dixon line, shrimp and grits (cheesy or otherwise) has become wildly popular across the US in recent years, and now appears on menus from New York to Oregon.

This deconstructed Shrimp & Grits Pizza honors the flavors and essence of this archetype of Southern cooking, while presenting something deliciously unique.

Why this Recipe Works

The biggest hurdle to this recipe was creating a crust that could stand up to hearty toppings. If you use traditional polenta preparation, you end up with a pizza that you have to eat with a fork. In order to make a crust that can be sliced, held in hand, and eaten like a proper pizza, you include a few extra ingredients.

In the end, this is technically not so much a "polenta" crust as it is a Polenta-Meets-a-Giant-Johnny-Cake. That's simply too long to put in a recipe title though, so I'm calling it Polenta. You can call it whatever you want.

We have an entire post devoted to our Spicy Polenta Pizza Crust recipe, if you'd like more tips on making this unique and tasty crust.

The Spice Mix we use for this recipe is a variation on the Skillet Dry Rub originally created for Spicy Pan-fried Rockfish; however, we've used it on everything from roasted vegetables to barbecued steak, and it is amazing every single time. It's especially great on shrimp, and really makes this Shrimp & Grits Pizza pop!

For the Spice Mix, you can use any chili powder you normally would use. We typically use a combination of ground pasilla, ground chipotle, and ground New Mexico Chili peppers in roughly equal parts (i.e., a little less chipotle, and a little more pasilla and NMC). All the ground peppers can be found at your local merchado, or in your grocery Hispanic foods section.

Shrimp & Grits Pizza is one of those recipes that looks long and involved, but in reality, is very easy to execute. You can make it in any large, oven-safe skillet, but cast iron will give your crust a nice crispy texture.

This recipe makes one 10-inch pizza. If your skillet is larger or smaller, adjust amounts accordingly.

Can you make this pizza gluten-free?

It's no secret that Mr B and I are big fans of cast iron cooking, and our 10.5-inch griddle is one of the pieces we use nearly every day.

If cast iron is something you're thinking about investing in, we suggest starting with a 10-inch chef's skillet and following it up with a 10.5-inch round griddle. These are the two cast iron items we use most often, followed closely by my beautiful cast iron pie plate!

Do you love Southern cooking? Be sure to check out some of the best recipes around in our Southern BBQ and Southern Cooking recipe roundups! 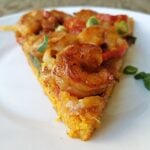 This recipe makes one 10-inch pizza. If your skillet is larger or smaller, adjust amounts accordingly. You can substitute 3 tablespoons of Spicy Skillet Dry Rub for the Spice Mix.