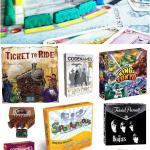 Family game nights are an easy, engaging way to have fun and spend quality time with the people you love the most. Here are our top picks for your next Family Game Night.

Whenever we get together with Mr B's side of the family, we inevitably end up playing games. We play marathon rounds of Mexican Train dominos and Farkle, and penny-ante poker like there is no tomorrow; and of course, board games. Lots and lots of board games.

The benefits of a long-standing Family Game Night tradition are manifold. When we sit down to play a game with the family, we set aside our phones and screens. We talk with one another. We find common ground. We make memories.

If board games are something your family enjoys, check out our Board Games picks to learn what you might want to add to your games cabinet. If family games is a new family habit you’d like to kick-off, use our list to get you started on the right track.

Either way, here are our top picks for the best board games for family gatherings, along with a little gift giving advice for everyone on your list!

Splendor is our current favorite "after dinner" game.  It can be played by 2, 3, or 4 players. It is easy to set up, easy to play, and a round last about half an hour, give or take.

Number of Players: 2 - 4 players.
Time to Play: 30 minutes.
Who Can Play: Recommended for age 10 and up.
Gift Giving: Splendor makes a great gift for smaller families.

Splendor is a game of chip-collecting and card development (along the same lines as Catan, if you are familiar with that game) but it takes much less time and commitment. Players are merchants of the Renaissance trying to acquire gems in order to acquire the most prestige points.

Splendor was the winner of the Golden Geek Best Family Board Game and was nominated for the Spiel des Jahres Game of the Year in 2014. An expansion of the game, Cities of Splendor, was released in 2017, including four modules (The Cities, The Trading Posts, The Orient, The Strongholds).

Splendor has a number of expansions, including:

Ticket to Ride is one of our very favorite games for family gatherings. Not only is the play interesting and engaging, but the game often inspires intriguing conversations as well.

Number of Players: 2 – 6+ players; more with expansions or if played in teams.
Time to Play: 30 – 60 minutes (according to the box). However, in our experience, the time can vary wildly based number of players and how much they like to visit with one another.
Who Can Play: Everyone, although younger players may need to team up with an adult. (Be sure to check out Ticket to Ride: First Journey for ages 6+.)
Gift Giving: Ticket to Ride makes a PERFECT gift for families, history buffs, travel enthusiasts, genealogists and genetic testing recipients (i.e., 23andMe, AncestryDNA, etc), and anyone who loves beautiful, well-conceived, entertaining board games.

In the simplest terms, the goal in playing Ticket to Ride is to build your own rail network to connect cities listed on your Destination. The game is easy to learn and provides hours of fun for families and experienced gamers alike.

There are versions or expansion packs that cover just about any inhabited place on the globe, so hop on board!

Ticket to Ride offers a number of game versions, as well as expansion packs to add to the original game.

Each of these versions is a complete game and does not require the original version to play.

If you already have a boxed set of Ticket to Ride and you’re ready to take it to the next level, check out this cool Ticket to Ride “Accessory Kit,” complete with Vintage Style Suitcase Storage Containers!

Technically, Mad Gab is a card game, not a board game, but we just had to include it here because when the kiddos were smaller, this was one of our favorite games to play at family gatherings. It’s super easy to learn, fast-paced, entertaining for all ages, and can be played in teams so an almost infinite number of people can play.

Number of Players: 2 – 12+ players/teams.
Time to Play:  45 minute (box); in our experience, a game can last anywhere from 10 minutes up to an hour.
Who Can Play: All ages. (Having a non-reader on your team is a plus.)
Gift Giving: Mad Gab makes a great gift for wordsmiths, lexicologists, etymologists, haiku writers, crossword puzzle doers, families with young children, and anyone who enjoys a little lively word play.

One of the reasons we enjoy Mad Gab so much is because very young children (i.e., non-readers) can have an discernible advantage. Why? Because in Mad Gab, it’s not what you READ or SAY, it’s what you HEAR!

Mad Gab is played by reading (or listening) to a string of unrelated words and trying to figure out what the secret phrase is. For example, your card might read, ‘Canoe Key Pace He Grit,” which when read quickly, sounds like ‘Can you keep secret?‘

Because non-readers are listening and not reading, they go into each round with no preconceived ideas about the outcome. Without “words” to confuse their brains, they can just listen to the other players reading the phrase, and often guess the target phrase before the readers on their team. Back before my youngest learned to read, she was always our most sought-after player when we chose up Mad Gab teams.

Spontuneous is one of my personal all-time favorite best board games for parties and big gatherings. As in, if I could only play one game on this list for the rest of my life, this Spontuneous would be IT.

Number of Players: 4 – 10+ players; I’ve played this with up to 30 people.
Time to Play:  15 minutes [box]; 15 – 30 [our experience].
Who Can Play: Ages 8 & Up, 4-10 players/teams [recommended]. Spontuneous is one of the best cross-generational games I’ve ever played.
Gift Giving: Spontuneous makes an excellent gift for anyone even remotely musical on your gift list: musicians, music lovers, car karaokeists, harmonizers, grandpas who play bass on the weekends, cowboys, campers, college students, Randy Rainbow fans, classic rockers, Broadway divas, and especially that person in your friend group thinks that it is perfectly acceptable to break out into song at any given moment. (↩︎ Me!)

Spontuneous is a simple party game that can be played by virtually all ages and musical tastes. A word is given and it’s a race to blurt out any song containing that word. For example: Can you think of a song with the word “COWBOY” in it? How about “HEART”? Blurt it out! Don’t worry about your voice, let it rip! (No talent required!! You absolutely do not need to be able to sing to play Spontuneous!)

Spontuneous is a GREAT GAME for big, cross-generational groups; the more diverse the better. I’ve played it with well over 20 people at a time on more than one occasion, and it is Hilarious!
If you need yet another reason to get Spontuneous, check out all the awards it’s garnered: Music Teacher Approved, Mom’s Choice Gold Award, Dr. Toy’s Best Vacation Product, Parent Tested Parent Approved Seal of Approval, The National Parenting Center Seal of Approval, Mom’s Best Hot Product Award, Creative Child Magazine Game of the Year, and Play Advances Language Award.

Codenames is a social word game with a simple premise and challenging game play. Two rival spymasters know the secret identities of 25 agents. Teammates know the agents only by their codenames. Teams compete to see who can make contact with all of their agents first. There is also a cooperative variant where a single team tries to achieve the highest score they can by playing against the game itself.

Number of Players: 2 – 8+ players; more if played in teams.
Time to Play:  15 minutes [box]; 15 – 30 [our experience].
Who Can Play: Ages 8+ [recommended]; however, we have played the Code Names: Disney in teams with great success with players as young four.
Gift Giving: We highly recommend Code Names for families with young children, Potterheads, college students, Maxwell Smart fans, Disneyphiles, and anyone who loves an easy, fast-paced game that doesn’t require them relearn the rules every time they open the box.

Codenames is easy to learn and play and can accommodate a wide variety of ages. Even people who don’t consider themselves “game players” will have a blast playing it.

Codenames is available in these versions:

King of Tokyo is just good clean fun, as my Daddy used to say. I mean, who wouldn’t want to fight mutant monsters, gigantic robots, and other aliens to become the one and only King of Tokyo, right?!

Number of Players: 4 – 10+ players; I’ve personally played this with up to 30 people.
Time to Play:  30 minutes [box]; 45 – 60 minutes [our experience].
Who Can Play: Ages 10+, 2 – 4 players/teams [recommended]
Gift Giving: King of Tokyo is great for families with kids, watchers of old Sunday afternoon movies, Robot Chicken fans, and anyone who is up for good game of robot wars with a space penguin.

The rules for King of Tokyo are simple and easy to learn, game play is quick, and even people that don’t think they like board games will jump right in. Roll the dice and choose your strategy: Will you attack your enemies? Heal your wounds? Improve your Monster? Stomp your path to victory!

OK, I just heard someone groan… I know, I know – Trivial Pursuit isn’t for Everyone. It’s just so… 80’s. But I have a head for trivia and a soft spot for this game, so it made the list.

Number of Players: 2 – 6+ players; more with teams.
Time to Play: Game time can vary wildly, but a full game should take about an hour, give or take.
Who Can Play: 8+ or 16+, depending upon version.
Gift Giving: Trivial Pursuit is a solid choice for trivia lovers, Star Wars fans, movie buffs, Beatlemaniacs, Potterheads, Millennials, and people who fancy themselves to be Smarter Than a 5th Grader.

Trivial Pursuit was extremely popular during my college years, and at that time, my circle was heavy with engineering students. The rules we played by reflected that imbalance to an unfair advantage.

Nevertheless, sometimes our games went on forever, because not one of us could ever answer the orange “Sports” questions. Luckily, nowadays I have Mr B on my team, and he is a Sports Trivia Master, so we have all our bases covered. Good times.

The Trivial Pursuit Classic Edition game features the classic gameplay that you know and love. Great for game night, this game contains 2,400 questions in six categories.

In addition to the Classic Version Master Edition [ages 16+],there are plenty of Trivial Pursuit variations and subsidiary card sets for everyone on your list! Here are just a few that caught my eye: