Photographing Mesa Arch at sunrise in Canyonlands National Park is iconically one of the best photo ops in the American Southwest. Here’s what you need to know to capture that once-in-a-lifetime shot. 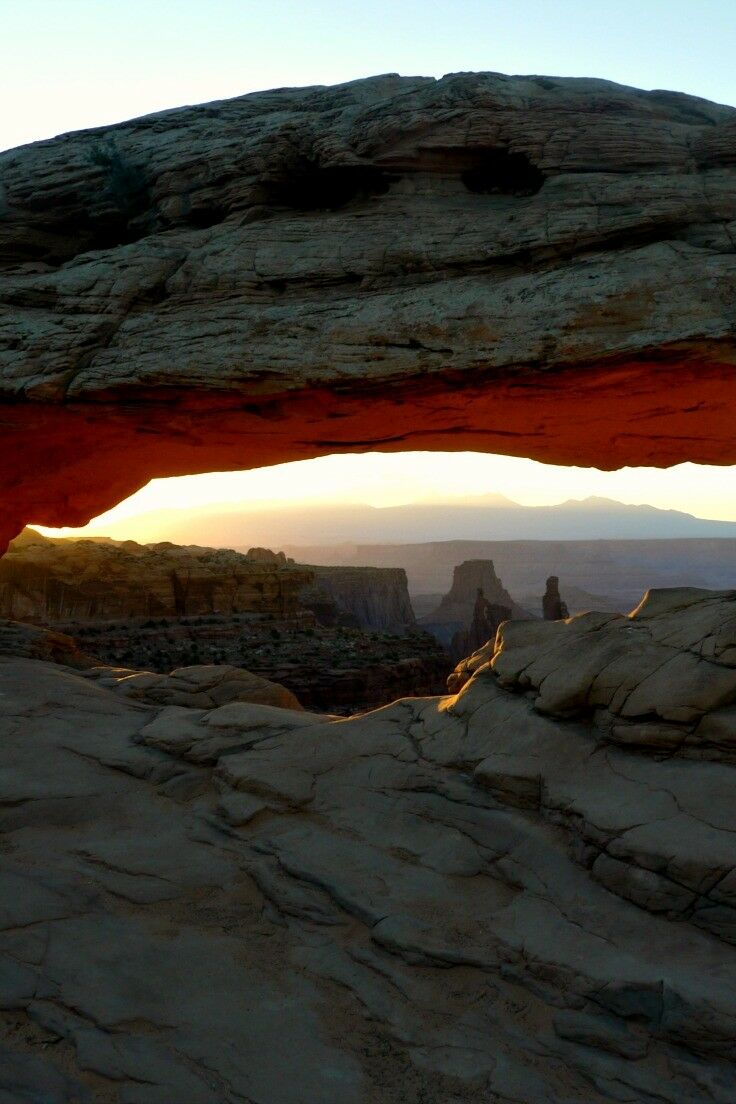 Full disclosure: Before we arrived on the scene, I had no idea that photographing Mesa Arch at sunrise was such a big deal. Our photog-daughter, who organized our trip, simply told us that we were going to a really cool place to take sunrise pictures.

Since Livy had been to this location a number of times before, I didn’t do my routine pre-trip research. Luckily, it all worked out great and I’m excited to share our adventure and tips for photographing Mesa Arch with you. But before I do that, I want to share a little story.

(Click here to scroll down if stories aren’t your thing.)

Photography Lesson: The Shot of a Lifetime

We arrived at the parking lot at the Mesa Arch Trailhead about an hour before the first hint of sunrise shrugged up the horizon.

Mr B and I made the short hike to Mesa Arch in about eight minutes. Our (mostly adult) kids were way ahead of us, and as we arrived, we found them momentary stopping under the arch for the requisite selfie.

As we maneuvered the uneven ground between the trail access and the arch to meet them, I passed an older man (older than me, at least) who was visibly agitated. His ire seemed to be directed at our kids, and I had no idea why.

“Get outta there!” he shouted at them, waving a hand in the air like an umpire calling out a batter. They were already moving away from the arch before he called out.

“Damn kids, trying to ruin my shot,” he muttered to me, by way of explanation. He had no way of know they were with us.

I should have just let it go, but I couldn’t help myself. “They’re really good kids,” I said quietly as we passed. (Sometimes I cannot make my inner mama bear shut up no matter how hard I try.)

He paused and looked back, face pursed, “They were going to ruin my shot.”

“Seems they were just catching the moment,” I replied, nodding toward the now empty Arch.

As I passed him, a young woman joined him on the trail. I overheard him say to her, “Damn kids were going to ruin my…”

“Dad…” she interrupted, using the same tender tone I once used with my own aging father in times of frustration.

“But I’ve been waiting a lifetime to take this shot.” I heard his voice break ever so slightly.

“I know, Dad.” She patted his shoulder, and his face softened. Together they went to set up before the inevitable crowd arrived.

We spent the next hour watching the crowd gather and set up. I kept an eye and ear on the old man, who seemed to snap to life when the camera equipment emerged. I watched him carefully set up his tripod, and adjust it so that he had a prime, unobstructed shot right through the arch. I watched him lean in to his daughter as they considered the optimal angles and adjusted their camera settings. By the time the haze on the mountains started glowing, he had every detail plotted out.

I was surprised when, as the sun began to rise over the mesa and light the La Sal mountain range beyond the arch, the old man motioned me over.

“You should shoot through right here,” he instructed. And then he stepped aside to share his carefully selected space with me. “See,” he pointed, “you can get a perfect shot of the cones rising up from the mesa right here.”

“You know,” he said, his eyes intent on the glowing skyline. “I’ve been waiting a lifetime to get this shot.”

I nodded, grateful for the lesson. 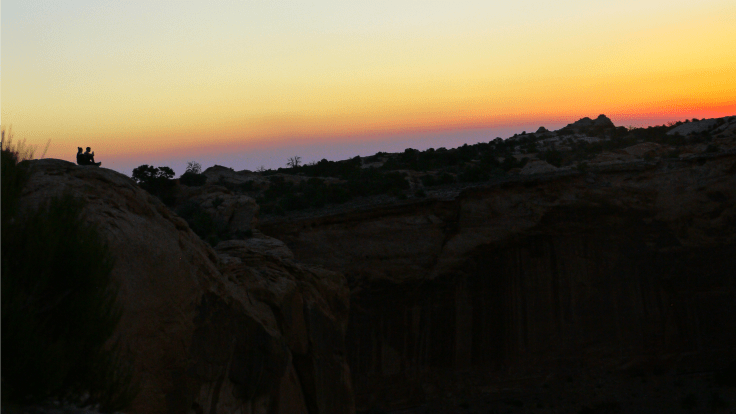 Things to Do in Moab Utah • Travel Tips & Information from GHW

We loved our vacation in Moab! As Oregonians, deserts aren’t often high on our list of destinations, but we were blown away by the other-worldly beauty of the Utah desert!

If you’re traveling to Moab, be sure to check out these posts, too:

As I learned on our trip, Mesa Arch at sunrise in Canyonlands National Park is iconically one of the best photo ops in the American Southwest. Here’s what you need to know to capture that once-in-a-lifetime shot.

Set your alarm so that you can arrive at the trailhead at least an hour before sunrise. This will allow you to catch the first glow on the horizon. It also gives you plenty of time to adjust your camera settings, and figure out where you want to be when that much-anticipated sunstar pops through the arch.

Note that the trail into Mesa Arch, which will take you about ten minutes, is very dark before sunrise, so take something to light your way. A headlamp or flashlight are both good choices. (Sure, you can use your phone, but don’t blame me if you run out of juice in the process.)

Stake Your Claim, But Be Flexible

Crowds are inevitable. Arriving early will help you get ahead of them and allow you to find “your spot.” However, be flexible; if you manage to secure a prime location, be compassionate to those who didn’t. (Karma, my friends.)

A tripod is helpful for photographing Mesa Arch in two ways: first, it allows you to stabilize your camera in the low light conditions and take awesome pictures. Second, it helps you stake your claim.

There is something magical about a tripod placed. I can’t offer any guarantees here, but for the most part, people seem to respect the space a tripod takes up and won’t move it, even if you aren’t hovering over it every second. With your tripod securing your little square of Mesa Arch real estate, you can move around a bit without feeling like someone is going to “steal your spot.”

Change Up Your Space

If you watch the light when you are photographing Mesa Arch, it’s difficult to take a bad picture. Doing so, however, will require you to move occasionally.

There are so many amazing shots at this location, and many do not include the Arch at all. If I had only been paying attention to the Arch itself, I would have missed this one entirely:

And this one. (Those are two of our kids in profile on the left.)

If you don’t heed any other information here, do this.

The biggest surprise I got while photographing Mesa Arch was the number of people who snapped the money-shot – that sunstar coming through the arch – and then immediately packed up and left. It’s literally like watching the first pop of fireworks on the 4th of July and leaving before the rest of the show.

Why would you take all the time and effort to get up early and drive out into the desert, just to snap one or two good shots and walk away? I don’t get it.

My best advice: stay at least 45 minutes after you see that sunstar.

It just so happened that our visit to Canyonlands fell on the morning of July 4th. Just as we were heading back on the trail to return to our car, I turned back one last time to take in larger scene behind us.

At that moment, someone standing on the rise next to the Arch rose up and stretched out, revealing the American flag they’d had wrapped around them. They then turned and hopped down to join their friends on the ground below.

The whole movement took less than five seconds, but somehow I managed to capture it. The image is below, and is one of my favorites from this trip.

Finally, Put the Camera Down

There are two maxims I strive daily to follow. (I’m not always successful, but I try.) The first is, Be Kind. The second, Be Present. That means putting everything down and just being there in the place with the people.

Take some time to put your camera down, and take in the spectacular show the universe is putting on for you.

Mesa Arch at Sunrise: The Shot of a Lifetime #photographytips #CanyonlandsNPS #canyonlands #mesaarchClick to Tweet